This is the first #SFMayor election that will use ranked choice voting. I never liked it for the supervisor elections and I don’t like for the mayoral race and now I’m going to tell you why. First, I cite Oakland who had Jean Quan elected as mayor that was a dark horse from the start. I won’t knock her or Oakland because I don’t live there, but it was obvious from the news reports that they were all reacting as if Chicken John became mayor. The second reason is that ranked choice voting hasn’t been explained very well. If you like one candidate and no others don’t vote for them as your first, second and third choice. You vote will be disqualified. . I was informed that the previous statement was incorrect. That you could put the same name down for all three, but if your first choice makes the cut your other votes won’t count again. So if you have three people that you would like to see as mayor vote for three, but you can just put one name or the same for all three.

Bruce Reyes Chow [@breyeschow] who also endorses John Avalos has challenged me to list my second and third choices and I am taking him up on that challenge. It is a difficult one because it’s more about who I don’t want than who I do want. Let’s look at who I don’t want as mayor first:

So there you have it. While Tony Hall and Dennis Herrera look like they might be my second and third choices, I still can’t count out Michela, Joanna or David. John Avalos has won me hands down as number one, but these other five will have to step it up now for my second and third choice votes.
If you have a chance please vote for me as the Best Local Politics Blog on SF Weekly. 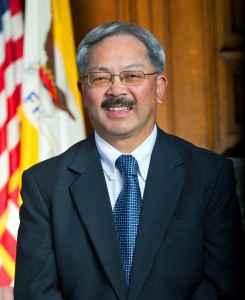 As expected Mayor Ed Lee will announce today that he is running for re-election as Mayor of San Francisco. This is coming from the man who received the position of Mayor all because he is not a politician and because he vowed not to do what he is now going to do. Ed has been a good Mayor in the seven months he’s had to do the job but he has now done the first thing that all politicians should not do — broken his promises to the people.

I would have to say that things could have been a lot worse in San Francisco since he’s been in office, but do feel some ground rules should be set.

Lee himself has declared that he is not a politician and that is why he was chosen as the interim mayor of San Francisco. By not being a politician he was expect not to make any sweeping changes to the city, but more act as a general manager and keep it together. So now the non-politician is going to step it up and run for the real Mayor position and jump into politics.
Perhaps this could be an attempt by Rose Pak who has stated anyone, but Leland Yee to dilute the Asian vote to keep Yee, the front runner from any possibility of gaining ground. If so, I would consider that a bold political move of a high stakes poker game sort of thing. In the long run though, I like Ed Lee and he was a good interim Mayor, but interim is just that. He will be appearing at a panel at the Castro street theater tonight and I urge you all to attend and see what he has to say, but think about what I’ve just written.