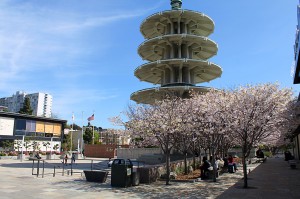 It’s time for me to get back to the 49 mile drive and today, it’s all about J-Town as we called it in high school or Japantown. The Japanese who mostly lived in Chinatown in the 1800’s after the 1906 earthquake needed a new place to live and moved to the sandy, crappy, yet spacious Western Addition. In this area near Geary and Gough street started a Japanese community that came together to hold their own.

Starting in 1960 and finishing eight years later the major investing Kintesu Corp. of Japan’s American branch finished building a unified Japanese Culture and Trade Center that we know today as Japantown.  At the time of it’s opening it was the largest collection of Japanese culture for Japanese ex-patriots and others to experience. I remember it was a cultural stop for many of us as school kids to learn about Japanese culture that had been previously overshadowed by Chinatown.

During this time sushi wasn’t common place and about the only Japanese food people actually knew of in San Francisco was probably teriyaki of one form or another. Japantown opened up to the non-Japanese people who visited it a chance to discover yakitori, sushi, sashimi before they were common place. There was also the Kinokuniya book store where you could learn more about the culture and history of Japan in English or Japanese. It offered a wide selection of materials and is still one of the largest Japanese bookstores in America.

Most of us today think of Japantown and think of the Cherry Blossom Festival this month or the Nihonmachi Street Fair in August. I think of the Cherry Blossoms a lot at this time because you can see them around the city, not just in Japantown springing to live with their pink to lavender blossoms bringing color to the streets. Then there is also the Japantown Queen that is crowned at the end of the festival that make all the men in San Francisco drool.

Sadly though, Japantown hasn’t changed much since it opened. There are still great things to see there, but most of the stores within it for the most part sell very cheap looking trinkets that look like the stuff most people complained about in the 70’s as “Made in Japan” crap. The Kinokuniya book store is still there and while it hasn’t changed either, is still an good place to go. The food is still good, but it really isn’t anything to set it off from the tons of other Japanese restaurants around the city. What IS a great find is the Japanese grocery store there the Nijiya Market which will show you some things that you won’t find in your average grocery store even if it’s in a largely populated asian part of the city. There is also the Asakichi Incense Store that will show you that not everything that burns needs to smell like sandalwood and patchouli.

While it does need an update, there is a great deal of things to offer people who want to feel like they’ve taken a trip to Japan without having to pay the airfare. Check it out.