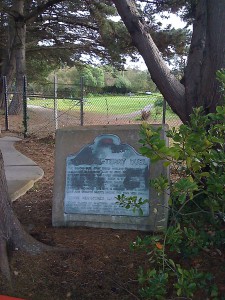 I just learned that dueling apparently was still in fashion in 1859 and it was here on the edge of great city near Lake Merced what was known as the last great American duel was held on September 13th, 1859 between John C. Broderick and David Terry. This little known duel is marked with only a plaque so I had to do a little background research to find out the story behind the duel.

Two men, both having suffered the disappointments and frustrations of political failure, were egged on by their…friends into fighting a duel for which neither of them had much stomach. After the election of 1859, Terry insisted on making a speech accusing the faction which had defeated him [for chief justice of the state supreme court] of being “the personal chattels of a single individual,” of belonging “heart and soul, body and breeches, to David C. Broderick.” The next morning, Broderick was overheard by a friend of Terry’s saying: “I have said that I considered him the only honest man on the supreme bench, but I now take it all back.” This was the provocation that led Terry to demand satisfaction. The duel was fought, and Broderick mortally wounded. On his death bed, he said: “They killed me because I was opposed to the extension of slavery and the corruption of justice.” Terry was tried and acquitted in Marin County. The duel resulted in post-mortem martyrdom for Broderick, and aroused such a hatred for Terry in San Francisco that he was forced to retire to Stockton.

In a footnote to the history of this duel, the two Belgian .58 caliber pistols [Them’s some big bullets] used by Broderick and Terry were sold at auction in San Francisco on November 25, 1998. The cased single-shot pistol set, including a copper powder flask, loading rod and mallet, were purchased for $34,500, at a Butterfield & Butterfield auction, by an unidentified private collector.

On Friday, Sept. 16th, ’59, at half-past 9 a.m., Hon. David C. Broderick, Senator of the United States from our State, died from the effect of a wound received in a duel, fought on Tuesday morning last, with David S. Terry, formerly Chief Justice of the Supreme Court of California. With the manner of his wounding we have nothing to do; the daily press, in their partisan opinions, have given many different statements in regard to it, and to them we refer for the particulars of the duel; our task is merely to speak of a fallen hero, a good man gone to his death. For days previous to his dissolution, the gloomy countenances of the whole people told how great was the feeling for the wounded man, and the groups of sad faces at all points in the city, showed the intense anxiety for his welfare. All hopes, however, proved fallacious, and while the bright sun was shining over our beautiful country, while everything in nature was arrayed in loveliness, and while a multitude of eager friends were awaiting the results of the efforts of his physicians, the spirit of the great man, the self-made leader of senates, the warm friend, the truthful and magnanimous antagonist, passed from the body and took its silent flight to the great unknown world of space. Not only does a State mourn for its champion and defender, not only does the population of the Pacific slope wail for the loss of its favorite, but a whole confederacy—a whole people, are full of sorrow and regret for his death. As was said of another, “The heart of a nation is throbbing heavily at the portals of his tomb.”

For years, Mr. Broderick has battled for principles which he considered right and of late he has exercised all his strength of mind and body for the advancement of those principles. Just having ended a political campaign with credit to himself, and full of high aspirations for the future, he has been cut down in the prime of his life, and all his hopes and fears are now as one.

Cold in death, the body, which formerly contained a mind such as only a God could create, lies calmly awaiting what disposition is chosen for it. There will be parade and pomp and a gathering of multitudes, but will these indemnify us for the loss we have sustained? Will the funeral ceremonies do ought towards healing the terrible wound in the body politic?

No! for such a man can never have his placed filled, he will always be missed. When occasions of this kind are forced upon us, we feel too deeply the great effect, the years will pass before the sacrifice will be forgotten. Time cannot entirely obliterate it, and the memory of the people will cling tenaciously to the circumstances. For our State, we are sorry. The shock sustained in consequence of this last terrible act will have a tendency to injure it deeply. We have, from the first days of California, have been more or less stained with the blood of our people, and the efforts of the cooler portion of our community have been unsuccessful as to the prevention of these foul blots. One after another of the damning consequences arrive, and California is forced to recede instead of advancing in the paths of civilization. When will we cease to be so terribly scourged and take our place among the enlightened of the age? If not soon, we will cease to exist as a people, for strife and bloodshed will annihilate us. Let us hope that a better spirit will hereafter prevail, and let us also hope that the successor of Mr. Broderick will be as honest and upright in the discharge of his duty.

It’s kind of hard to imagine that in the city know for hippies and pacifism that two men would be taking shots at each other, no less in the quiet area around Lake Merced, but I’m sure life was very different at the end of the California Gold Rush in San Francisco.