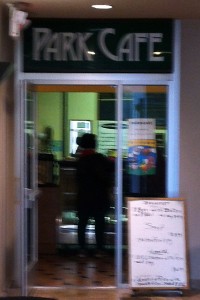 I like going out for breakfast when I can. I love me some bacon & eggs with a side of toast and hash browns. I don’t really need an upscale kind of place to eat, just one that’s clean, quick and cheap. That’s where the Park Cafe comes in because you’d never know it was there. It’s small, hidden in the Stonestown Medical building and you’d never think about it and probably miss it when you’re walking by.

My wife and I decided to try it one day after I had a dentist appointment. It was close to noon and I hated going to the dentist because he always treated me like a five year old tell me how awful my teeth were and how they were all going to fall out if I didn’t brush them 3-6 times a day with fluoride rinses afterwards. Needless to say, I changed dentists and found one who was nicer and cheaper. I digress a bit. We decided to try the Park Cafe, at the time bacon and eggs with toast was just $2.99 each and you got coffee with it. This of course was prior to the dot com bomb, but today they prices are now $4.99. That’s still a deal in my book. The nice part is they can scramble your eggs well so their fluffy and hard and overcooked and you get three slices of bacon, not the skimpy two most places offer. You can also swap out the toast for a bagel at no extra charge.

Hardly anyone goes there, except probably the doctors in the building during their lunch who are too lazy to walk across the mall. There’s no windows inside the place so the best view you’re going to get is of beverage container. I was always a kind of odd duck there as I used to get Martinelli’s apple cider to go with my breakfast there. I can’t stand orange juice unless you add in some vodka [which I don’t recommend for the mornings] and apple juice for some reason made me want to drink more water. I think we were one of the only houses prior to having kids that stocked apple juice.

To find the place you walk in the front door of the building and walk straight toward the elevators then turn left. They have no website and you’ll hardly find anything on them if you search google. My apologies for the shaky picture, but it was a quick shot on the way out of the building this morning. We would have stopped in to eat, but our daughter doesn’t like doctors too much yet because she’s been getting vaccines every time she’s gone, so I could understand her wanting to get the hell out of there, but if you’re ever out that way check them out and tell them I sent you.