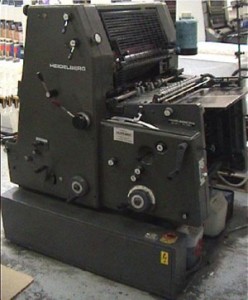 I worked in the printing business for many years. I started out teaching myself graphic design which got me hired by Pac Bell who was at the time connected with Ogilvie, Mather Direct. Then I moved on to PG&E who was connected with Landor & Associates and then to Charles Schwab. All these were great jobs, but  then the companies started phasing out their design departments and letting the printers do all the work so I moved over to working directly with the print shops.

After awhile, I started noticing an alarming trend. I’d get laid off and the company would go under in about 6 months. This has been a trend I’ve been seeing since the early 90’s and it’s just getting worse every day. Why? People don’t need printing as much and there are larger conglomerate print shops that are located in the midwest where it’s cheaper to work and they can get you  1000 business cards that are four color on both sides for under $15. Most of the companies I’ve worked for would charge you somewhere in the neighborhood of $300 for that many and they’d be one maybe two colors on the card. Why the big jump in price? The smaller printers offer better services which means you don’t have to give them a perfect file that meets their expectation. You can give them a screwed up file and they’ll usually fix it. The problem there is that if they’re fixing it then it ends up with a higher risk of coming out wrong and the company has to do it all over again at their own expense.

The other thing that’s killing the smaller printers is that people use the internet more and are finding that they can get something cheaper halfway across the country and overnight delivered back to them for less than 1/10th of the cost. The other reason [and this is especially true in California] is that there isn’t as much need for paper anymore by companies. Memo’s are sent out by email. Junk mail is sent out by email [incidentally, I manage five websites and I get close to 1000 junk emails a day.]

Paper is needed by magazines, newsletters and books mostly now and small printers don’t do that sort of work. One company I worked for used to do a lot of printing for the law industry. Now there’s a lot of lawyers who are finding that they can create a template and just print in one color on their laser printers and it will look darn good. Many newsletters are moving to PDF format because hey, we’re a green company and we don’t need 100% PCW [that’s post-consumer waste, the best type of recycled paper]. I know of several law firms who are looking into LEED© Certification and doing their best to eliminate as much paper as possible.

Gone now are the days of small and medium sized printers taking orders for 100k on letterhead and envelopes, because people don’t need them as much anymore. So even though I’ve spent close to the last 20 years working in the industry it’s time to call it quits.  Take a good look at that printer up top, because you’re going to be seeing less and less of them in the future.