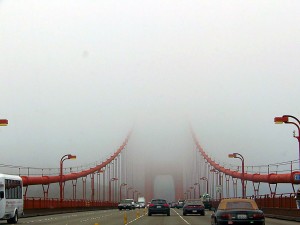 I have to say that most of my commute experience has involved Muni with a short 3 month stint having to drive from San Francisco to Burlingame. Of those two experiences I’d have to say the commute to Burlingame was the worst because it involved 280, 380 and 101. Commuting to Marin is much different and I learned that highway 101 has a dark and a light side, but with the opposite meanings applying.

Traveling down to Burlingame I usually hit sun pretty quickly, but I also hit much more traffic. I could get there in a half hour to an hour and a half and you just could never tell. While I’d call this the light side because the sun always seemed like it was out even in the winter, it was also a nightmare because the traffic was stop and go most of the way.

Getting to the Golden Gate Bridge is another story, while current construction work on Fulton made it take me 30 minutes to get from Ortega and 19th to Fulton and Funston, from there it took me six minutes to get to toll booths of the bridge. I’ve figured out a work around that will get me from my house to the bridge avoiding the back up and get me to my twelve mile destination in under a half hour. The odd thing is that in this case even including the bridge toll [$6 because it’s the Golden Gate Bridge be-atch!] is cheaper than taking the public transportation route which would be Muni to Golden Gate transit and would take a little over an hour to do. It’s actually about half the price including gas.

Since I rarely have reason to travel across the Golden Gate Bridge I had forgotten what it was like. Dark, Stephen King like fog until you get through the rainbow tunnel of the Waldo grade. I had to turn my wipers on and off because the fog was so heavy a person from San Diego would call it rain, but it was just an amazingly fun drive. The Bay Bridge speed limit is 50 mph which means people drive about 70-80 mph in part because the fog is usually higher up over there and the lanes are wider and there is more of them.

The Golden Gate Bridge is 45 mph which means that people drive maybe 50 mph, but during commute it’s usually around 40 mph if not a little slower. because there are only three lanes north bound and two lanes south bound. I guess they want people to get out of San Francisco as fast as possible, but we only want to let them in at a slow and expensive rate.

I had vowed in the past to never cross a bridge again, but only realized that was from my experience with the Bay Bridge. Crossing the Golden Gate was, well, nice. It was the calmest drive I’ve ever had and I definitely didn’t feel as cramped as I did do when I ride on Muni during rush hour. 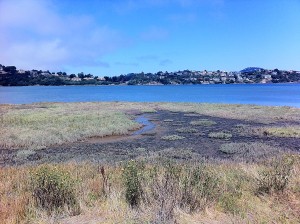 The biggest bonus was after getting out of the Waldo tunnel seeing sunlight and arriving at my destination I find that the company I’m freelancing for offers it’s employees free snacks like fresh fruit, chips, granola bars, yogurt, juice, tea, sodas, coffee and bottled water. They’ll even make a lunch run for sandwiches which you can enjoy in the employee lounge which has a 60″ HD flat screen TV and comfy couches. When I look out my window I get a gorgeous view of the Marin estuary and when I walk out on the deck I get the smell of the fresh salt air which I love while watching blue heron’s and egret’s walking around the marshlands.

I think I’m going to get used to this freelance gig really quick.