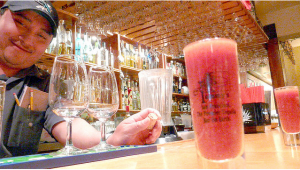 As you probably know from my writings I have a thing for Mexican food. There was a place I used to like to frequent that was an old school Mexican restaurant and it  wasn’t in the Mission District, it was in the Richmond District. It was Tommy’s. A working man’s type of place where the food was good and the cocktails would knock you on your ass. I suppose it was because they were not too far from Trader Sam’s where professional’s go to drink.

Tommy Bermejo who started the place in 1965 has died and it’s a sad day in Tequila history. While Tommy’s didn’t invent the Margarita, they sure perfected it. In margarita history there are several people making the claim to being the inventor and I think it was a guy who owned a joint called Tommy’s Place that got the origination transferred over to Tommy’s.

Tommy’s was all about tequila. They had more types on their wall than you could probably find in one place in Mexico. They serve only 100% agave tequila, that means no mixing “neutral spirits” with it. This is the real Mexico hombre. Their website has a list of the over 100 tequila’s they have on hand from blanco, to reposado to añejo to extra añejo. They even have a page to educate you on the finer points of tequila intake. I always hated tequila until I got a chance to try an añejo which is aged like a fine brandy. You don’t make tequila jello shots with this or margaritas. These are fine sipping tequilas that you enjoy slowly.

Tommy and his wife Elmy where from the Yucatan and the food they served showed that. Sure, they had the guacamole and nachos or “white people mexican food” as I call it, but they had other dishes that were pure Yucatan such as the camarones al mojo de ajo and the pork culetas, but they had kind of California-ized over the years mixing in some of the more Americanized tastes in Mexican food. Still, it was a great place to eat and it was inexpensive to eat there. Always good when you dropping a deuce on some fine aged blue agave.

I never got to meet Tommy himself, or if I did I never knew it was him, but I’m glad to see that the place will live on after him. I think this weekend will be a good day to drop in and have a few shots of  Alcatraz Añejo. Diga a dios que dije hola, Tommy!