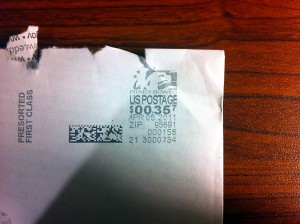 I’ve been trying not to stray from talking about San Francisco, but today I have to talk about the State of California’s Unemployment Department and the U.S. Postal Service because one of them is to blame for the fact that yesterday, 12/12/2011 I received what was called my last unemployment check dated 4/4/2011 and mailed on 4/5/2011 as the picture shows.

WTF? Seriously? It took over eight months for them to send me my check? I worked for a company in 2010 under the JobsNow! program whereby my salary was repaid by the government. This lasted until the funding ran out at the end of September 2010 and I was helping them out on an equity only basis until I got my next job. In the meantime I started to collect unemployment again. Here’s where things started to get weird.

The put me back on quickly and then in January I got a bump up again because I had earned more per quarter than before because of my job. Then they cut me off because I had used up my money and didn’t have 40 times my weekly earnings to get an extension. I brought in the figures to show them differently and they gave me an extension, but now at the maximum draw for unemployment which they once again cut me off because now that I was making more money from unemployment I still didn’t have enough to qualify for an extension.

Just so everyone knows, if you work and are laid off you have to have earned in a quarter at least 40 times what you will receive in a week to qualify for an extension on your benefits. If you do not, your benefits will stop and you will no longer be eligible for unemployment benefits until you find work again. You’ll be unemployed, but not on the list of people who are unemployed.

So let’s get back to the check…I asked for a hearing again and went down and sat beside the judge who I explained everything to and who was very confused about the whole process and how this came about. She also asked me why when I filed my appeal that I filed it late. Uhm, late? I filed it the day after I received it and dropped it off at the post office directly to get it to them as quickly as possible.

The judge asked me why the post office took so long to deliver the letter. Well how the hell am I supposed to know? I don’t work for the f*cking post office! OK, I didn’t say that, but I’m hoping after she asked that question the answer popped into her head. I followed up stating that I had filled out form until the end of my payment time and hadn’t received the last check. When I received the write up of the trial this wasn’t mentioned, but my denial of further benefits was.

This all leads me to the check I received yesterday, over eight months late. After being denied extended benefits from way back then on the stub it tells me, You may qualify for extended benefits. If you qualify, the claim will automatically be filed. No action is needed on your part. You will be notified by mail of your eligibility.

Great. I’ll be waiting to hear from them in a couple of years.