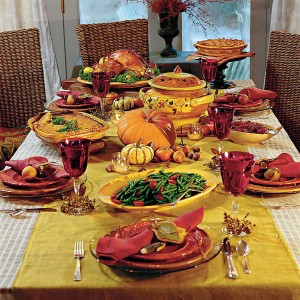 Today is Thanksgiving, the day when we eat way too much, drink way too much and we all fall into what has been referred to as the Turkey Coma after dinner. This is the biggest day of the year for feeding the rich and the poor so I decided to take a look into the history of this all American holiday.

Now the oddest thing about this holiday around the world is that except for Grenada, no one can pin it down to an exact date. Christmas or yule is always on the 25th of December. Valentine’s day is always February 14th. The Fourth of July is always on, well, you get my point. Easter always changes dates, but I guess that’s because people are confused about how our lord and savior pooped out multicolored hard boiled eggs while coming back to life and gave them to bunnies to hide for the little kids to find.

But getting back to the point…Thanksgiving was a end of the harvest celebration for years that finally got it’s name in 1863 when President Abraham Lincoln declared November 26th a day for all to give thanks. What people refer to as the first Thanksgiving that the pilgrims celebrated was [and I lifted this from the font of all truths, Wikipedia]:

The event that Americans commonly call the “First Thanksgiving” was celebrated to give thanks to God for guiding them safely to the New World. The first Thanksgiving feast lasted three days, providing enough food for 13 Pilgrims and 90 Native Americans. The feast consisted of fish (cod, eels, and bass) and shellfish (clams, lobster, and mussels), wild fowl (ducks, geese, swans, and turkey), venison, berries and fruit, vegetables (peas, pumpkin, beetroot and possibly, wild or cultivated onion), harvest grains (barley and wheat), and the Three Sisters: beans, dried Indian maize or corn, and squash. The New England colonists were accustomed to regularly celebrating “thanksgivings” — days of prayer thanking God for blessings such as military victory or the end of a drought.

Three days of eating and turkey was just a small part of it. Since the first pilgrims were near the coast, seafood was probably the biggest protein they consumed during this time. The holiday wasn’t as secular as it is today and I still haven’t been able to find out how the turkey became the center piece, but it seems that turkey day started in the 20th century.

I had never thought about it, but there is also some controversy associated with Thanksgiving and I quote [once again from wikipedia]:

Much like Columbus Day, Thanksgiving is seen by some as a celebration of the conquest and genocide of Native Americans by European colonists. Professor Dan Brook of UC Berkeley condemns the “cultural and political amnesia” of Americans that celebrate Thanksgiving, saying that “We do not have to feel guilty, but we do need to feel something.” Professor Robert Jensen of the University of Texas at Austin is somewhat harsher, saying that “One indication of moral progress in the United States would be the replacement of Thanksgiving Day and its self-indulgent family feasting with a National Day of Atonement accompanied by a self-reflective collective fasting.”

Since 1970, the United American Indians of New England, a protest group led by Frank “Wamsutta” James that has accused the United States and European settlers of fabricating the Thanksgiving story and whitewashing a supposed genocide and injustice against Indians, has led a National Day of Mourning protest on Thanksgiving at Plymouth Rock in Plymouth, Massachusetts in the name of social equality and in honor of political prisoners.

Another notable example of anti-Thanksgiving sentiment was when hundreds of supporters traveled to Alcatraz on Thanksgiving Day to celebrate the Occupation of Alcatraz by Indians of All Tribes. The American Indian Movement also holds a negative view of Thanksgiving and has used it as a platform of protest, most notably when they took over a Mayflower float in a Thanksgiving Day parade. Some Native Americans hold “Unthanksgiving Day” celebrations in which they mourn the deaths of their ancestors, fast, dance, and pray. This tradition has been taking place since 1975.

Well, I guess giving thanks for successfully invading another people’s lands could piss a few people off, but it wasn’t like they didn’t have a hand in it. The Indian tribes that the first pilgrims interacted with actually gave from their food stores to help them through the winter because they didn’t have enough when they arrived.

All in all, Thanksgiving to me is just a day to gorge yourself on food. Now we just have to figure out how to get our $5 Safeway turkey that’s been in the refrigerator for two days to defrost so we can cook it today.