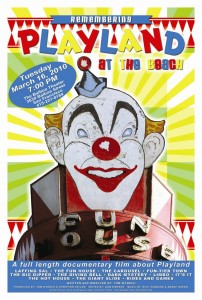 I got a surprise the other day when someone told me that the documentary Remembering Playland At The Beach was available on DVD and at the library. I thought I really didn’t have much to remember about Playland because the only time I got to go was the day it closed, September 7, 1972, which means it was a probably my parents giving in to me wanting to go that they finally agreed that I could go as a birthday present since my birthday was the day before.

Well, it turns out there was a lot to remember that I had forgotten. While I only got to go on the last day and most of the rides were closed by then, I did remember the Funhouse the most, but seeing actual video footage of it made it even more memorable. I loved the slide in there, but never realized that it was actually five stories high. Running through the spinning barrel was a piece of cake and the turntable my Dad and I did a few times just because the idea of sitting on a well polished spinning wooden disc and being flung at the padded wall at high speed just sounded like a lot of fun to a 10 year old kid. One of the people they interview mentioned that OSHA would  even let a place like that be built today which is probably true when you see the footage. The trick on the turntable was for everyone to lock arms so it would spin faster before you got thrown.

There were the dodger cars which would give you whiplash when the large metal cars would smash into each other while sparks from the pole leading up to the ceiling to power the car dropped down on your head. Yep, another OSHA cringe moment. It was so large that they could have 80 cars running at once.

I didn’t get to go on the Diving Bell which is what I had always wanted to do, but after seeing the footage and some pictures it probably was a good thing I didn’t. One of the people said that when the bell was yanked back up out of the water everyone felt like they were going to die and from the looks of it, I’m surprised no one did.

The Big Dipper was gone by then, but replaced by the Alpine Racer which was closed down by then. The urban legend that a sailor stood up on the Big Dipper to show off to the girl he was with and got hit by a cross beam getting his head torn off is actually kind of true. He did get hit in the head, but landed in the lap of his girlfriend dead with a crushed skull. Oh and there were no seat belts of any kind back then. Not on most of the rides. I can kind of see why my Mom never wanted me to go there.

Dark Mystery was the only other ride I got to go on that day and I jumped a few times with things popped up and the screams played. I do remember there was one box we passed where cheap aluminum figures of a boy and naked girl popped up which didn’t make me jump, but point and yell to my Dad, Did you see that! I told my Mother all about that when we got home and I can remember a glaring eye shot in my Dad’s direction.

The history of the place was what I found to be amazing. When you think of amusement parks you think of kids, but Playland at the Beach was different. It was mostly adults going on the rides then and there were plenty of pictures and footage of men in suits and fedoras with their women in dresses and white gloves. Something I never expected to see. There was also a place next to it called Fun Tier Town which was for the kids which had some pretty timid rides. It was a big spot for kids to have birthday parties, but I believe it closed down earlier because there was one birthday party I was supposed to go to there and they were already closed  and that was before Playland shut down.

It was the Whitney Bros who made the place the most popular, but after George Whitney died and his son George Whitney, Jr. took his place that there started to be family troubles and Playland was sold to it’s final owner in 1970. This person unfortunately didn’t really know how to run an amusement park, especially one that was fogged in with salt air constantly so the whole place fell apart quickly leading to it’s closure in 1972.

What amazed me in the footage was that they had footage from the early 60’s before the civil rights era started and yet you saw white kids, asian kids and black kids all playing together without a care. It really was just a little bizarre to see.

During it’s heyday Walt Disney was traveling around to all the amusement parks and talking to the owners to see what worked and what didn’t. Walt really liked a lot of what Playland was doing. So much so that Walt hired George Whitney, Jr. to help him build Disneyland. Several of the attractions at Playland were the inspiration for Disneyland rides.

Today, Playland at the Beach is no more, but luckily there were some fools who went in after the closure and stole as much as they could and put together Playland not at the Beach Museum in El Cerrito. Several of the people interviewed run the museum and from what I’ve seen they’ve saved a lot of the old arcade games and maybe added to them as well. I’ll have to put that on my list of places to visit now. The Carousel has been refurbished and is now at Zeum at Yerba Buena Gardens. One Laffing Sal is at the Musee Mecanique at Pier 41, the other is at Playland not at the Beach in El Cerrito.

If you remember Playland, you definitely need to see this video. If you have a love of amusement parks you should see this as well. It wasn’t like Disneyland, but it was definitely a San Francisco landmark.