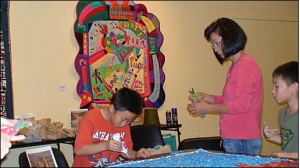 I just read one of the funniest articles that is even too San Franciscan for me. It was an article on “alternatives to the Super Bowl”. They suggested you take your kids down to the San Jose Museum of  Quilts and Textiles to learn about Mayan embroidery.

WTF?!?!? You’re suggesting that you should turn your back on the most American institutional homoerotic wargame that we know as the Super Bowl where you eat tons of fatty food, drink lots of alcohol and bet on which one of your friends will be the first to puke on your floor for learning about…textiles?

As you can tell, I’m not exactly down with football. Usually because the fans are mostly overweight now along with the athletes who the coaches push to put on pounds to keep the opposing side from “penetrating their end zone”, but textiles? At least I’m relieved that this over the top “San Franciscan” idea is taking place outside of San Francisco.

I guess I should blame my college broadcasting semiotics teacher who teamed up with folklorist Alan Dundes who did an analysis of the sport. He made it sound really, well, homosexual [I’d use the term gay, but being straight would be considered an insult.] When Alan talked about the terminology of players who’s title was the “tight end” and “wide receiver” c’mon you gotta wonder don’t you?

Now I’m not a total football hater. I played a lot of football as a kid, but then again, I played football, not watched it. As a kid I’d be off at the local playground playing baseball or basketball and come back and find the local kids playing football across our scattered lawns and join in, but when I’d come inside and my Dad was watching a baseball game and I didn’t want to sit there and watch I “wasn’t into sports”.

Go figure, I suppose I didn’t like watching a bunch of hunks dressed in body enhancing armor trying to penetrate each others end zone.