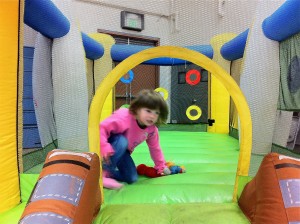 Since our daughter has two weeks off from pre-school we have to find something to do with her so she doesn’t build up enough energy to explode. So this morning we decided to take her to the California Academy of Sciences. Unfortunately we left a little before noon and the garage was full which means that the Academy would be full as well. Since our little one doesn’t like big crowds too much we made a change in plans. 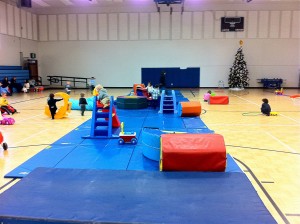 If you have kids, this is a great place. For only $4 you can stay as long as you like. They have a bouncy house which for the $4 is worth it alone, but they also have lots of other soft play mats and climbing structures for the kids to play with as well as tricycles, slides, hula hoops and a few other things. While the bouncy house is always there some of the slides and climbing structures change depending on whims of the two guys from Daly City Park and Rec who run the place, but they always do a good job.

On my first outing here I was a little horrified to see regulation basketballs for the kids to play with [recommended ages are 5 and under] and then I picked one up and realized it was half flat. All the balls aren’t fully inflated. So I had to do a test. I had the friend I had taken my daughter with hit me in the face with the ball. It hurt, sort of, but I’ve been hit in the head with a fully inflated basketball and that hurt worse.

[mappress mapid=”14″]What I really like about this place is that it encourages the kids to think about how to play. They can use all the “stuff” to create their own play space instead of here’s your playground and this is how you’re supposed to play. One day I had about 6 kids laying down on a giant parachute as I pulled them around the gym. Luckily there was another Dad who helped out and took over for me so we could switch off without having a heart attack. You have your regular groups of Moms there and they all are very friendly and don’t seem to mind if your kids “interact” [that’s the term I like to use for crashing into each other]. They understand that kids are going to be kids. My daughter reached into one woman’s bag of tortilla chips from Chipotle one day to help herself and she laughed it off. 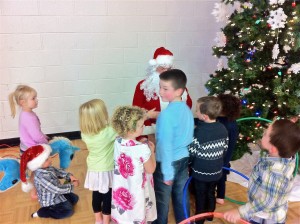 One of the fun things too about the Doelger Center is that around Halloween and Christmas they do a little extra. Halloween has a costumed parade of all the kids and ends with a bag of candy for each of them. Christmas, and this was my first experience of it here, they had a Santa giving out toys to all the kids. I did notice a bit of an Irish brogue as he talked and realized that he was probably a friend of the “Irish Mom’s Club” which is a group of Irish women who tend to sit together and talk while their kids wreak havoc on the place. I tried to keep our daughter away from Santa figuring that he only had enough toys for the kids in that group, but one of the Mom’s told me that they had enough presents for all the kids. Good thinking. You wouldn’t want to have your kid meet Santa only to be told he forgot her present.

Afterwards our daughter decided it was time to visit Chipotle for lunch. We drove down the block to Westlake and split a steak burrito bowl and chips and guacamole between the three of us [after all the burrito bowl gives you more than half your days calories]. Total cost for this outing? under $15. Now that’s a deal to take advantage of.