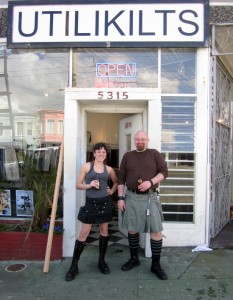 Seeing as San Francisco has been hit with hot weather I remembered an email I got a few weeks ago. Utilikilts, a company that opened up in Seattle, WA in 2000 has just recently opened up a San Francisco Utilikilts outlet. It’s located at 5315 Mission Street just south of Geneva Avenue. Those who frequent the Folsom Street Fair will know them because they’re usually at everyone. Now it’s just easier for them since they have less distance to travel. The company tends to attract the performance artist, Burning Man types of people so I suspect the store will be very similar.

While I haven’t had a chance to visit the store yet, I am a proud owner of a utilikilt. I was turned on to them by a friend of mine who wanting to be different purchased the leather utilikilt. He was telling me how comfortable it was and I thought to myself, “well, why not give it a try.” This was during a time that you’d only see a few punk rockers or the guy who works at the “all things Scottish” store or whatever it’s called downtown wearing one. There was a bit of trepidation, but I gave it a shot.

So I get my kilt and try it on. Very comfortable. Now I understand the creator Steven Villegas when he said, “Men should not wear bifurcated garments because it goes against nature.” I always wondered why boy’s bikes had the bar connecting the seat to the handlebars so that if you got in a crash your family jewels would get bashed by a large metal bar. So why should men have to wear pants so that their junk gets all smashed up at the point of bifurcation? 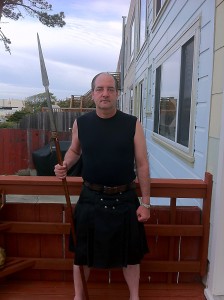 You do learn about wind when you wear one. Something women have known for years unless they’ve never worn a dress. Luckily they make kilts with a “modesty snap” that while sort of turning the kilt into a bifurcated garment there’s still lots of room for the boys to run around inside. You’ll also get something for a while that women don’t usually get. That is people, usually women pulling up your kilt to see what you’ve got under it. Scottish tradition dictates that you go commando i.e. no underwear, but practicality says either way is fine. I was at a picnic on a fine spring day and decided wearing boxer briefs was best so when I sat on a log I didn’t have to pull bark splinters out of my butt. Just don’t do what the punk rockers did and where skinny black jeans under them. That defeats the purpose and comfort.

Big guys benefit the most from these because you don’t have to worry about getting a good fit on your legs. My biggest problem is what to wear on my feet with them. Tall socks and boots seem to be the common denominator amongst the people who wear them and for some reason to me sneakers just don’t do it for me. Since I like to wear mine in warm weather I usually choose to do so while barefooted. A beer in one hand also seems to be a major accessory if you look at some of the pictures on their site [or the picture above] A utilikilt makes hot weather seem a lot less hot and cold days aren’t really so bad.

My first time wearing one out in public was rather humorous. My wife and I were going to a party over in Berkeley and we decided to take BART. We got on at the Glen Park station and as we’re going down the escalator I learned about wind and kilts. I had to hold it down so I wasn’t flashing everyone. When we got on the train I only had a few odd stares mostly from hispanic men who couldn’t figure out why I was wearing a skirt, while their wives were giving me that look like they wanted to take a peek under the hood so to speak.

OK, that was easy enough. We get off in Berkeley and stop by a 7-11 and start our short walk to the party. As we were walking we happened to notice a man with his granddaughter walking behind us. We noticed him even moreso when he stated, Now Katie, what is different about the gentleman walking in front of us?

IN A PERFECT SCOTTISH ACCENT.

Oh crap, I’m about to get razzed by a Scotsman for wearing a kilt. Katie responded with, I dunno and Grandpa finished off with, He is wearing a kilt! I stopped and turned and said, It’s an American kilt.

It doesn’t translate well to words, you really had to hear it, but I think you’ll understand. We stopped and chatted a bit. He was very interested that the kilt was starting to catch on in the U.S. No razzing ensued and we went off to the party where nobody batted an eye at Eric in his kilt. So you’re wondering what I wear under the kilt?

Good girls don’t ask and bad girls find out for themselves. Now go out to the mission and check them out.