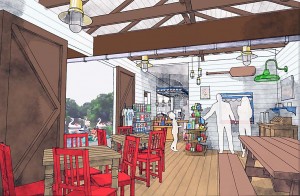 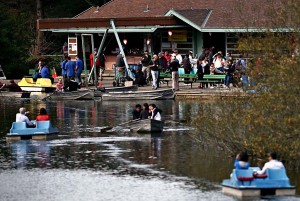 How I managed to leave out the largest manmade lake in Golden Gate Park is beyond me, so it gets it’s own spot today. Stow lake offers many things to people who visit the park. Joggers can be seen looping around it in the morning. You’ll find a few elderly people walking around with their grandchildren feeding scraps of bread to the ducks and turtles or you might find people renting boats to paddle around the lake watching urban hikers make the trip up to the top of the centerpiece Strawberry Hill.

Stow lake has come under fire recently because the Stow Lake Corp, a family run business that has owned the boathouse for over 60 years may be ousted from its roost by a company run by Alex Tourk a former aide to our old friend Gavin Newsom. Now I have to say it’s been awhile since I bothered eating any of the standard fare offered by the boathouse, but I do admit I have fond memories as a kid of eating that possibly carcinogenic pink popcorn and drink a half flat coke that they served up while walking around the lake. I’m going to have to stradle the fence on this one because while the boathouse and boat rentals need a major make over, I’m not sure that what would replace it while looking better would better serve the public. I’m not sure I want to see a pricey yuppified expensive cafe going in there, but things can’t always stay the same. 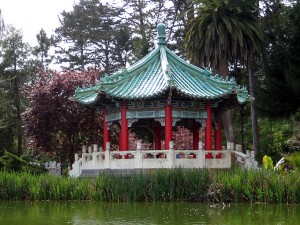 Around back from the boat rentals and boathouse is where you can rent bikes to cruise around the park which does an especially good business on Sundays when that part of the park is closed to car traffic. These are your regular bikes, but recombinant tricycles and four wheeled surrey type bikes that you can fill up with the whole family. While being the main focus of Stow Lake if you walk ar0und you’ll find there is more to be had at this stop.

As a kid I remember hearing stories about piranhas living in Stow Lake. This was one of those urban myths that actually had a bit of truth to it. There was a time period when I was a kid that every kid had a fish tank. As the family got tired of changing water and taking care of the fish you had two choices, flush the fish down the toilet or be more humane and release your tropical water based fish into the cold Stow Lake. I guess no one ever thought of bringing them back to the fish store and just giving them back to the owners of the store, but that was the early 70’s.

Now one of the interesting things about tropical fish is that they don’t all need 80° water to survive. Some can actually acclimate to colder water and one of these fish is a vegetarian version of the piranha called the pacu. I have seen pacu in the lake in the past and you can’t miss them because they’re about four times the size of a piranha and can be found snapping up bits of bread that people would throw to feed the ducks. I remember throwing fishing nets into the water and seeing what kind of fish you would find there. After sticklebacks and minnows we did find quite a few aquarium fish that had been dumped there, mostly goldfish. The pacu was always the goal to catch, but I never caught one. 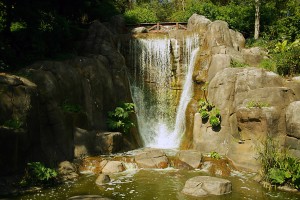 As you’re walking around the lake you can hike up the top of Strawberry Hill passing over Huntington Falls. It’s a pretty easy hike and the pay off at the topic isn’t exactly the most spectacular. You get to see the remains of a house who’s owner I can’t find anymore, but the rocks have been made into a circle that has been used for campfires and it sits next to a pond that serves as an emergency water supply to fire hydrants around the city. I’m not sure if they’ve tested this any time recently, but I’m not going to hold my breath if it needs to be used in the future. The best part about being up high here is the views of the city. It really is one of those wow moments when you feel like you’re kind of out in the wild and then when you get to the top you see that you’re surrounded by the city.

As you travel back down don’t forget to stop by the Chinese Pavillion. It looks great from a distance, but after construction they didn’t take into account the water spray from the falls would collect on the clay based soil and now drain so it is a bit mucky when you walk up to it.

If you travel off to the side of the boathouse you’ll find several large picnic spots complete with grills. These are rather nice if you want to have a party and don’t want your friends destroying your house. The especially nice part about this picnic spot is that you’re walking distance from the boathouse and the nicely refinished bathrooms. Public restrooms I have no problem with them being changed and updated every few years. I think we can all agree on that!