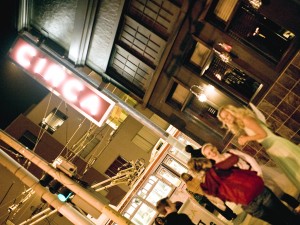 More specifically, Chestnut Street between Fillmore and Brodrick for what  I’m going to be talking about. I spent a good part of my youth here since my Dad used to run a gas station at Steiner and Lombard prior to Phillips 66 being dissolved.

There’s still a few of the old places left like Lucca’s Delicatessen, the Horseshoe bar and Chadwick’s of London, but some of the old places of my youth are gone such as Vince’s News stand that’s been replaced by a place called Prescription Rx which when you think about it is kind of redundant name. Mostly you’ll find chain stores all along Chestnut. The originals that are still around you can tell because they look it.

This was always a nice part of the city which made it hard for me to understand why the Presidio Theater between Divisadero and Scott was once a pornographic theater. If you’re looking for places to eat you’ll definitely find them here. There’s all sort of restaurants such as A16 or Bistro AIX which are SF favorites placed in between the Jamba Juice, Johnny Rockets and the other chains. It’s not a bad mix because at least the chains that are there are decent ones usually meaning that they have higher prices which shows in the people you see walking the streets.

Walking the streets of Chestnut is not for the faint of heart. There are tons of 30 something hipsters walking around with their lattes showing off their new 4 month old twins along with the ass of an 18 year old they’ve reacquired after pregnancy by hitting the gym regularly and showing it off in their tight, black leggings. Well, a lot of them, not all of them. You get a few odd balls, but on Chestnut street it’s almost everyone is beautiful and fit [You want to go 3 blocks over to Union Street if you want to see everyone beautiful and fit]. The people are nice, but you’ll have to juggle yourself around all the strollers and dogs [usually both combined] to get down the streets. There’s a lot to see here and if you venture onto the side streets you’ll find even more food stops.

[mappress mapid=”4″]For some reason though the people living in the Marina have gotten a bad name. It used to be a middle class mostly Italian community until sometime in the 80’s when young afluent yuppies started moving in and turned the place into a bit of a kind of swingers scene. People were walking the streets at night trying to make a hook up instead of finding a bar. The Marina Safeway which is where you went to shop if you lived on Chestnut has been called the “Singles Safeway” or “Dateway” was listed as one of the best pick up spots in San Francisco and they were talking about frozen chicken. Cameron Diaz in “There’s something about Mary” turned the Marina District girl into a skank who would turn her underwear inside out to get another days wear out of it.  I think she was to blame for this more than anything else. Nobody stinks that you’ll pass by here. Yes, a few of them have a bit of an attitude trying to one up each other when you overhear them telling their friend that now that the twins have been born they’re going to finish their law degree in between their pilates and yoga classes and then waiting for a response from the friend who’s going to have to top that.

If you do stop by definitely drop in at Lucca’s Delicatessen. You might have to wait a bit, but it’ll be worth it. They get their mozzarella shipped in direct from Italy every week.