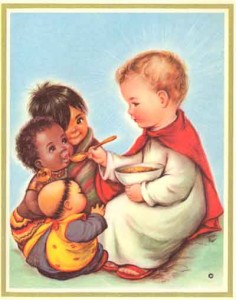 Now when I was growing up I was a public school kid so I didn’t understand the concept of pagan babies. I was probably one of the only kids in my school who never had to go to church on Sunday’s even so religion was a bit of a foreign concept to me. I understood that there was this God thing that was bigger than us and loved us, but at the same time was smiting us more than giving us candy bars.

A friend who likes to get into debates with me even though I agree with him asked me the other day how many people did Satan kill in the bible. The answer is 2. God killed millions. I digress a bit, but at times religion is a funny thing to me. When a group of the old Sunset District crew started to bring up pagan babies it jarred loose a memory from my youth. My Mom always used to tell in a ironic fashion about how when she was attending Saint Bridgette’s that she used to bring in pennies to donate to the pagan babies.

What is a pagan baby exactly? Well, from what I can remember and research has given me they were African, Asian and/or Hispanic non-Christian kids that were forcibly converted over to Catholicism by missionaries that were finances by shaking down kids in Catholic schools for their pennies and/or lunch money. My Mother was one of them and so apparently were all the other Catholic school kids in the Sunset.

We aren’t talking about hippy wiccans here we’re just talking about poor, third world children that the Catholic church said, you’re hungry? here’s some food if you believe in our God and become civilized and accept the names we give you. In my search I found a guy who was remembering buying his first pagan baby at 9 years old for $5 [sounding a bit like slavery yet?]. The pagan baby he purchased was named Daniel James and his $5 gave him a  Certificate of Adoption as a Souvenir of the Ransom and Baptism of an Adopted Pagan baby named Daniel James.

DUDE! Ransom and Baptism? I think the Catholic church needed better PR people back then. You’re teaching a 9 year old about slavery and ransom. That makes the nun’s steel ruler seem a bit tame don’t it?

The best part of this is that the pagan babies fought back. This individual received one of those Nigeria bank swindle schemes in the mail wherein the pagan baby he purchased offered him $4 million dollars in exchange for $100,000 paid into a Nigerian bank. The pagan baby even mentioned his purchase by him and offered to meet with him in Nigeria to talk about the old time religion that had helped him so much that he wanted to pay him back for it.

It seems that the pagan babies have learned how to turn the scheme around. I’m wondering now if there’s a linkback to the Vatican’s records of pagan babies from Nigeria. A salam aleikum.