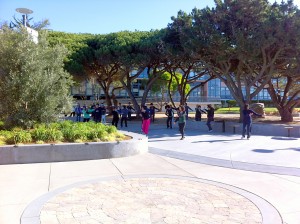 If you head to West Sunset Playground on the weekends with your kids you’ll likely see a large line up of mostly Chinese women dance exercising to a mix of Chinese pop music or slightly upbeat house sounding music.

Most of the women are in their late 40’s or older it appears to me though I can’t tell because for some reason Asian’s tend to hold onto their youth for much longer than the rest of us. Dancing is a good method of exercise, but this is nothing like the wild dancing you’ll see at a rave. This is a much slower and actually choreographed looking form of dance. Think of it as like country line dancing with Chinese music.

Unfortunately for us, this isn’t the best time to take our daughter to the playground because she loves to watch the dancing and let’s herself go and wants to join in. She runs around the playground for a couple of minutes and goes into hyperdrive running for the dancers. She’s at an age where music makes her move and when she see’s others dancing it makes her want to join in. In some ways I wish my Cantonese/Mandarin was better so that I could talk with the few that are directing the dancing, but that wasn’t high on the list of things to learn when I was a kid. All I ever learned was how to say hello, goodbye, thank you and a few other ways that would get your face slapped. As a side note, growing up in the Sunset district I’ve learned how to get my face slapped in twelve different languages.

But let’s get back to the dancers. They are the regulars which started out as a weekend Tai-chi group and has added in a few more side groups on the weekends. The men sometimes are there to butch things up practicing martial arts in a group. One day there was a group of Chinese fan dancers [which is a little known martial art where the fan thingies between the paper used to be knives]. You pretty much never know what to expect there other than the dancers on the weekends, but it is definitely an interesting cultural display that you don’t really see anywhere else. I tried shooting video of them so you could enjoy the full experience, but unfortunately my iPhone doesn’t have any steady cam features so it would look like the video was shot by an alcoholic going through withdrawals.

The Chinese dancers are a fun event to see every weekend at West Sunset playground if you’re looking for something different to do and if you have a kid or two the playground that has had a recent redo is a great place to visit. ??????