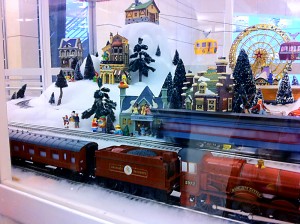 I’ve never been a big model train buff, but I was pretty surprised years ago when I was taken to the Randall Museum and ushered down into it’s bowels to a room that was set up and run by the local model train club. This was impressive. It was about a 20’x40′ room with a huge town and mountain range built with the little train cars moving all around it. THAT was impressive.

My wife was making a big deal over the train display they had out in front of the Fisher Children’s Center at the mail library so I figured, let’s take a trip down and see it. Now I have to admit I used to have a problem with libraries as it always seemed the books were too out of date for what I needed. I’d go in looking for a computer book and could only find “How to use your Texas Instruments calculator”. Well things have changed and I’m always surprised at all the new stuff I find at the main library. Today we saw a little museum like piece on “Eats around San Francisco”. It was pretty much old menus which was find with me because I got a few laughs from some of the restaurants that were shown that have now gone.

[mappress mapid=”9″]But let’s get back to the train exhibit. Well, I’ll have to say I was a little disappointed. It was about 10’x4′. Not exactly as sizable as I expected. I always think big so I figured it would be this huge impressive thing. Well, not exactly, but it was still fun. It was fun enough for me to pull out my camera and capture a little video for all of you to see in all it’s 720p glory. It was fun at least putting the video together even though I really do need to get an OWLE Bubo to hold my iPhone 4 so there’s less shaking and better picture quality [anyone want to get me a late Christmas gift?] Well here’s the video and I hope you like it. Not all of the trains were working, but at least my daughter got a kick out of seeing Thomas the Train going round and round, but I don’t think she knows about the Polar Express. Hogwarts seemed to have a problem once we arrived and was stopped dead, but at least it was stopped dead in front and not in the back so the little Harry Potter’s could have something to scream about. Oh and last thing: $3 meter parking, library was free.