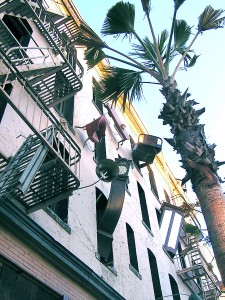 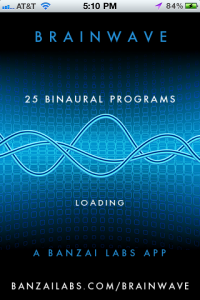 I’ve been one to play around with binaural beats in the past. These are tones that you listen to through headphones that are supposed to retune your brain for a number of things. They are supposed to make you more focused, wake up and be alert or even help you fall asleep. Some people list this as pseudo-science and while being skeptical I like to keep an open mind.

Well, while my own results have been mixed on doing it myself, I found an app a friend recommended to me that made a world of difference. It’s called Brain Wave by Banzai Labs and is available for the iPhone and iPad. They aren’t making these for the Android, but I can tell you that this is a fun app. Many of their apps seem to be in the brain tweaking realm.

I had to hop on the bus the other morning for an interview and because it was early in the morning I had to leave the house I decided to use it to run the focused and alert program. It has ambient sounds to go along with it so you aren’t just hearing the binaural beats in and of themselves. This is pretty good because when you listen to binaural beats through headphones you sort of hear a tone that sounds like it’s panning back and forth between your ears rather quickly. Let me say that about 10 minutes into the trip I felt myself perk up quite quickly and I definitely was very focused and alert.

The way you create a binaural beat is to combine two mono tracks to form a stereo track. Here’s an example, if you want to stimulate the 4hz frequency of your brain [that’s the area that gives you spiritual bliss-like feelings] you create a tone of say 400hz on one side and on the other you use a tone of 404hz. The 4hz difference when you listen through headphones are supposed to tune your brain to accentuate those frequencies and bring you into that state of mind.

While I haven’t tried all of these yet, I’ve tried several and I’m pretty pleased with the results. As I am typing this article up I’m running the Euphoria program and I have to say I’m getting the giggles something fierce. Each of the programs has a minimum setting length so that you can get the full effect in the least amount of time. Most of the programs run for 30 minutes minimum, but some will do the job in 20 minutes. For $1.99 it’s definitely a program that can help you get your head in the right space with very little effort. The ambient sounds are ocean, thunder and rain [my favorite for use during the power nap setting], light and medium rain, flowing creek and pink noise [not recommended unless you’re a total geek.]

One thing to keep in mind is that if you are an epileptic or prone to seizures you might want to consult your doctor first. 10hz tends to trigger seizures in people. I say give it a shot and tell me what you think. If nothing else you’ll get to listen to some interesting experimental music that might have you thinking in a different way. It’s kind of like yoga for the ears.