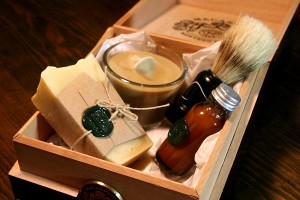 I have decided for a number of reasons to go back to old school shaving. Part is the cost of the modern day cartridges and foaming gels and the other is because there’s just something about pulling out that old mug of soap and lathering it up with a brush that I want to get back into. There are many upscale stores in San Francisco that will charge you a pretty penny to go old school, but it doesn’t have to be that expensive.

I moved up from double blades, to triple blades, quadruple blades and finally five bladed cartridges. These cost me close to $5 each. Now I only shave every other day so I can get a lot of life  out of a blade. I take good care of my blades and after I’m done shaving rinse them off in water then dip them in 90% isopropyl alcohol to completely dry them. I can get close to a month out of one of these blades. It starts to show at the end of the month when it makes it harder to get a close shave, but I never get any cuts.

I did for awhile use shaving soap and found out that a single bar lasted me about a year. I actually used the cheap Williams soap that I think including the mug cost me about $2.99. That’s a good price for a year’s worth of shaving cream. When you add hot water to the soap and then soak the brush in hot water for a few seconds and start building up the lather the first thing you’ll notice when it goes on your face is that it’s warm, not cold. This including the liquid helps soften your beard to make it easier to remove. I’ve even heard now of men who use a pre-shave oil on their face to help relax the beard stubble. Many of these are expensive, but you can use Cornhuskers lotion that you can get for about $3 and save your money.

I’ve never tried a double edged safety razor before, but Dad swore by them. I’ve found them online ranging in price between $15-$150 and while price does matter to some extent you don’t have to go top shelf at the start. You’ll have to find the blades as well which so far I’ve only seen online. I’ll start with five blades at first, but if it all goes well I’ll get 100 which will drop the price down to around 20¢ each. I’ve heard you can get about 5 shaves out of each side so with me shaving every other day that means it’ll cost me about $3.80/year for razor blades. Far less than for the cartridges. Merkur blades seem to be the standard of excellence people are recommending. There are many suggestions for how to use a safety razor and youtube has tons of videos. Some of them are quite good like the one posted at the bottom.

You’ll have to consider the brush as well. There are three types, boar, badger and synthetic. Boar is the most common, but comes in three grades the cheapest and worst usually what you find in stores. Synthetics have varying results, so I’ll suggest a badger brush since from what I’ve read they seem to be the most consistent and best overall quality. It’s also what I’ve had in the past after trying a boar brush. Badger brushes hold water better and you can find them in a few stores in San Francisco at a relatively cheap price. Oh, and by the way skip the after shave lotion and just use a squirt of witch hazel afterwards followed by a few splashes of water on your face followed by any decent after shave balm or moisturizer.

Overall, it looks like from my research that I can get into this for about $30 investment and that should hold me at least a year with only having to buy a bar of soap and some new blades for the next year. Which would add only another $5 each year. Sure the disposables and cartridges are convenient and I’ll probably take one along when I travel, but I think for the overall cost savings I’m going to give it a shot.