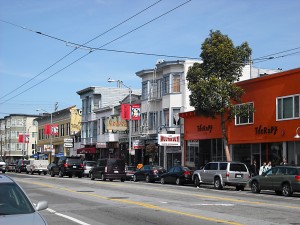 So I’ve been spending the better part of the week in the Mission District as many of you can probably figure out by by talking about my trips on the 48 Quintara. I actually did live there for about six years 16 years ago and I have to say that not too much has changed except that you see more white people now, but it’s still the best place to find a good selection of Hispanic foods.

That being said, I can’t wrap my head around why the Mission Hipsters™ have wanted to call this place their home. The place isn’t the cleanest still, the building are old and while nice to look at when you get inside some of them can be a little disgusting. The crime has dropped significantly from when I was there [no I was not the cause of the high crime rate], but there are still gangs running around and a flying bullet doesn’t care if your a Norteño or Sureño.

I have noticed that the Mission has tried to gentrify itself a bit which is a nice way of saying people with money come in and buy up poor people’s places pushing them out to make room for more people with money. The look is kind of odd when you walk past Rosamunde that’s right in between two run down stores that look like they haven’t seen a fresh coat of paint in over 50 years.

With that being said, I know there’s still good in the Mission, because I wouldn’t have lived there for six years if there wasn’t. The people are friendly and by that I mean the pre-hipster people. It’s got great weather most of the time and even when it doesn’t it’s still not that bad. If you want to experience the real Mission you have to go to anywhere around 24th and Mission. That’s still the place where you hear the salsa music blasting all day and some of the best places to buy Mexican food. If you get a chance stop by the Mission Panaderia that’s there. They make the best Mexican pastries in my book.

I think, but I’m not sure that the Mission Hipsters™ are located more down around 18th and Mission because you’ll suddenly hear less Spanish and more English and the crowd turns decidedly more Caucasian and Asian. You still will find a few Mexican food places, but there aren’t the same. The Mission kind of loses it’s feel here due to it being more affected by the gentrification and is kind of, in my mind a Disney version of the Mission.

I can see the Mission Hipsters™ wanting to live and work cheap, but the gentrification takes time and most of the start ups come and go quickly that are around here. They’re kind of an unwashed version of the Marina crowd with less money. I know I’m sounding mean, but I can’t help it. While you do have BART serving the area, you still have to go downtown to get to BART or take a slow bus to get there. This is probably why people out in the avenues are kind of isolated from the Mission District and vice versa. There’s no way to get there from here and vice versa.

That’s part of the reason I don’t get the concept of the Mission Hipster™. They try to be alternative fashion conscious, but I don’t get when being hip and cool meant that you have to step over excrement and homeless people when you walked out the door of your antique apartment that probably needs some major maintenance work. Note: I lived in the outer Mission in a full five room house built in 1924 that was always well maintained, but that was back in the early 90’s which was pre-Mission Hipster™ period.

I guess I don’t get Mission Hipsters™ because I’m a Westside Hipster™. Now we can let the hipster gang wars begin. There’s probably an app for that.