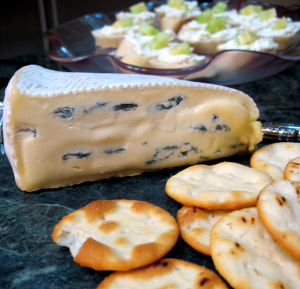 Well when our friends came over they decided that they wanted to go out to eat. I’m thinking we’ve got cambozola AND prosciutto di parma in the house [along with a lot of other foods, but still] why go out? Well it turns out we did venture out to the Tennessee Grill and had huge meals that left us feeling like a light dinner sounded best.

As I sat down at the table that night my wife cobbled together some of the food we were going to eat for lunch. She handed me a some toasted bread and I automatically grabbed the cambozola and spread it on to the nice warm toast and noticed it start to slowly melt into the bread as I took a bit. 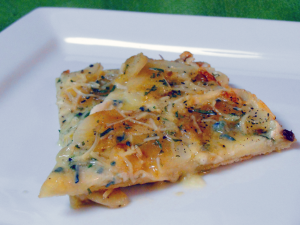 Oh God. I forgot just how good this tasted, but like the title says, it’s the “heroin of cheeses”. You just can’t stop and you keep going back for more and more. I was cutting up little pieces and dropping them on my salads, crackers, bread. I think I brushed my teeth with it one morning. It is just that good a cheese. I had become obsessed so I went to look up some information on my renewed addiction via Wikipedia:

It was patented and industrially produced for the world market by large German company Champignon in the 1970s. The cheese was invented circa 1900 and is still produced by Champignon. In English-speaking countries, cambozola is often marketed as blue brie.

It is made from the same blue Penicillium roqueforti mold used to make Gorgonzola, Roquefort, and Stilton. Cream is added to the milk, giving Cambozola a rich consistency. Therind of the cheese is similar to the Camembert rind. Cambozola is considerably milder than Gorgonzola. It features a smooth, creamy texture with a subdued blue flavor.

The cheese’s name appears to be a portmanteau of Camembert and Gorgonzola, given that its flavor profile combines the moist, rich creaminess of Camembert with the sharpness of blue Gorgonzola. It also refers to the Roman name Cambodunum of the city Kempten, where Champignon is located. 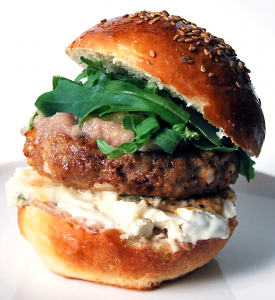 OK, I knew it wasn’t make in the Bay Area, but this German cheese with an Italian sounding name made by a company with a French name deserves at least some shrine in whatever town Champignon is in. I started searching for more info on my new love and found that people are putting this on everything now. Hamburgers with cambozola, pizza with cambozola, cambozola cheese pastries. It’s everywhere. It’s got a somewhat strong, but smooth taste, but none of that stinky cheese smell. It’s also a semi-soft cheese so spreading it isn’t too difficult. I just finished a snack of cambozola on toast with some barnier olives from Andronico’s and the tastes went well together. It didn’t even clash with the dark chocolate I had to finish my meal. Then I found out that Michael Chiarello of NapaStyle and Food Network fame has made a sauce with cambozola that he sells through NapaStyle and he even gives a recipe for asparagus with cambozola sauce on the Food Network website. OK, I know what I’m making for dinner tonight.

There is a downside to this wonderful cheese though…it’s not cheap. A pound will run you between $15-$20 depending where you get it. We used to find the cheapest at costco, but we don’t go there as often as we rarely need a palette full of anything anymore. If you can keep the addiction in check though it is a great cheese to try. It’s pretty easy to find in San Francisco as most grocery stores have it and it seems to be made only by Champignon so you don’t have to wonder whether you’re getting the best brand or not.