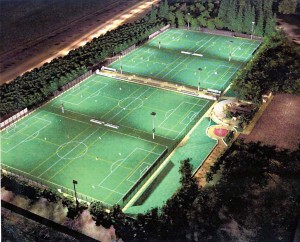 OK, I know I’m going to take some heat from this, but I actually believe that the soccer fields would be better replaced by the artificial turf than keeping the grassy gopher community that’s there now. To me it is a sound safe move that will only affect a very small amount of Golden Gate Park.

I know I sound like a blasphemer for making these statements, but this isn’t the old astroturf. This is fake grass that’s made from 100% recycled materials that doesn’t require the maintenance  a true grass field would require and already isn’t getting. First off, grass as we grow in lawns and for playing fields is unnatural. The strains of grass that we grow today are all genetically modified [GMO?] to produce a given result. Golf courses use bent grass which works best at a very short height. You can see what happens when it grows too tall by driving down Sunset Boulevard to see the newly planted patches that haven’t been mown yet. It turns a sickly yellowish brown. Bent grass also requires more frequent mowing and fertilizing which it’s not getting on Sunset Boulevard. There are taller grasses such as fescue and Kentucky blue, but those less water, but more care. Neither of these are suitable for a playing field.

There you have the gopher problem. Pocket gophers and moles are running rampant in the city which is part of the reason you have the predatory birds over the current soccer fields. Those same birds can be found all over the park or any other park in the city because we have such an overabundance of gophers. I was at my daughter’s school yesterday helping take care of the garden area while school is out. they’ve pretty much given up on the lawn because of all the gopher holes. I was finding one every foot. I actually tripped when my foot hit a hole I missed. There are kids who have been playing at the soccer field who have had to be rushed to the hospital because of falls caused by the gopher holes.

The artificial grass is pretty nice looking and is very comfortable to walk across. I have neighbors across the street who have it installed and they don’t have to water it or do anything to it. There is also a soccer/baseball field at South Sunset Playground [with lights and there are houses right across the streets, but no one mentions problems with that] that has the same grass and I would take my young daughter there so she could run around and even when she did fall [she was 2 at the time] there was a bit of a cushiony effect from the turf.

The way it is installed is that first you dig out the dirt and install a barrier that keeps gophers from digging up through it. Then you lay down the grass followed by common sand as a stabilizer and then small rubber pellets made from recycled tires. The grass itself is made from recycled plastic. It’s been such a hit that San Jose has installed in around Santana Row.

Now people have addressed concerns regarding the lighting that’s going in. From the rendition the lights will be facing east/west. The field is roughly 1000′ from the north end of the park and about 600′ from the south end. Most of what is close to it are commercial businesses. Yes, if you have a home nearby there might be a little light leakage, but it wouldn’t be anything like having a spotlight shining in your living room window like I did when Saint Ignatius had there night football game that with the drapes open we didn’t need to turn on the lights in our living room and dining room and we could still hear the noise of the generator because it was so big. The lights at the chalet won’t even be above the trees and wouldn’t need generators because they can be powered off the grid. They could even install solar panels on top to make them more efficient.

Here are some of the environmental concerns I’ve seen stated and I’ll address each one.

Converting to the artificial turf will rid the soccer fields of the pesky gopher pests and make it a safer place for our kids to play soccer. The lighting will add a little bit of night glow to the skies and won’t be a problem for local residents because I don’t know many people who sit looking out their windows at night. There will also be the addition of site amenities such as a children’s climbing structure, picnic tables, benches, bleachers, drinking fountains and trash receptacles. The existing restrooms will also be renovated with new interior fixtures in compliance with ADA requirements. That doesn’t sound like a bad thing now does it? I might actually have a reason to see the soccer fields.