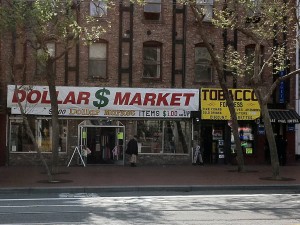 Everyone is talking about the possibility of Twitter and other tech company moving to the mid-market area. I had the chance to walk around the area today to get a feel for what it would be like if I had to work there. It wasn’t a pretty sight and now I’m going to tell you all about it.

As some of you may remember I have a friend that lives in the Tenderloin just a couple of blocks from where I was today. For people like him Mid-Market works because the first thing I noticed was all the Dollar Stores. If you’re single and on a limited budget Dollar Stores are the way to go. You don’t need the jumbo Costco sized items because they usually go bad before you’ve finished them [except bacon bits which I feel you can never have too much of]. Being able to get smaller food items like cooking supplies cheap is good. So that’s about where anything good I have to say about this area ends.

After noticing all the dollar stores, I started to realize that with very few exceptions I was probably one of the only sane people on the streets. I saw people who looked normal and then they’d start screaming at the top of their lungs and banging on anything that was around. I wouldn’t call them much of a threat to anyone except themselves, but there were a few tourists who for some reason thought it would be a good idea to come up here and found out the hard way they were wrong.

Then as I made my way to Civic Center Plaza I noticed that there at least 40 people sitting around on the granite slabs and almost everyone of them either had a cane or a wheelchair. These were not elderly people either. They were around my ages and in many cases younger. These could have been props if they were asking for money, but they weren’t asking for anything. They were just sitting around talking about nothing much and they just looked like a slab of granite in the sun what about the only thing any of them had to look forward to other than making it through another day.

Suddenly I hear a group of black guys in front of me start cheering, “You go girl!” and the usual cat calls, so me being male turned around to see a woman who thought it was a good idea in the middle of Civic Center Plaza to drop her pants and start peeing. I suppose if seeing a girl peeing is the high point of your day, what exactly does that say about the quality of your life? The stench of barf, urine and excrement is very present here even though the place looks relatively clean.

If you can stomach the smell and want to find food there are a few places, but not many. Mostly fast food places some of which I remember eating at and they didn’t stand up to the same places in other parts of town. There are a few diner style restaurants, but they all served pretty much the same thing. Eggs at Breakfast and burgers for lunch. If you look real hard you might find some teriyaki, but you’d really have to look hard. There’s actually more places to eat a block away on Mission street, but I was walking Market because I hadn’t had a chance to walk this part in several years.

Yes, there is the Main Library which I’ve talked about before and that’s nice, but I don’t think too many techies will be taking their lunch break to go to the library [which oddly enough does have a decent cafe downstairs].

Twitter has been offered a sweet offer from the city to stay here and take up residence in Mid-Market that the city is hoping to bring up that area. So far it looks like that will be a long time coming for this part of the city.