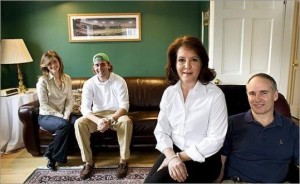 I was a boomerang kid before the term came out. I didn’t move out of my parents house until I was 28 because I didn’t see a reason to. Neither did my mother who cried for two days even though I only moved 15 minutes away. I lived on my own visiting twice a week for twelve years and then after my wife and I got evicted from our house we were renting and seeing that we couldn’t find anything acceptable within our price range and the fact that my mother was in her 70’s with health problems we moved back in with her.

My heart sank because I heard the stories of the loser 40 year old living in his mom’s basement. Which is exactly what we did. We were living in the downstairs rooms, but because my Mom occupied so much of the four bedroom house I had to turn the garage into my work place, so I was in effect, living in my Mom’s basement at 40. People don’t always run the numbers as they say, but if you have a minimum wage job you don’t have enough money to afford a one bedroom apartment in the city which requires $21k-25k/year in San Francisco. Minimum wage doesn’t cover that let alone food and utilities. If you’re unemployed and getting the highest pay out you can afford a one bedroom and have $200 extra for food and utilities, still not enough.

People shouldn’t be surprised that kids in their 30’s are moving back in with their parents. My old roommate moved in to his Mom’s house after she died because it was his, free and property tax compared to rent was way less. My Mom died over a year ago and if we had to rent this house we would have to plunk down close to $50k/year. People like to blame Prop 13, but when it comes to rent Prop 13 has nothing to do with it. It has to to do with the fact that San Francisco has water on three sides and no room to expand. There’s also the fact that there’s the San Francisco mystique that helps keep prices up. You simply are not going to find a place in San Francisco to rent for under $1500/month and if you do it’s called tenement housing.

Our parents were the smart ones. They worked hard during a good time and were able to buy a house that they hopefully passed on to their kids which hopefully they didn’t have too many of. I was lucky being a single kid. I didn’t have to sell the house to invest in my own. My name was already on the lease so we were golden. People talk about not wanting all the hassles that come with home ownership, but if you run the numbers the hassles [meaning costs] are less than renting. Say you have to replace your roof every year [which you don’t] that’s still less than rent for the year. Want granite counter tops? That’s less than two months rent. If you start to look at how much per year you have to pay in rent here you’ll begin to understand how people making $75k/year are barely getting by. I suspect that home ownership in San Francisco will become more reasonable when home prices start to drop into the $500k range. Then the monthly mortgage costs will begin to equal rental costs. Oh how I wish I had run the numbers back when my roommate and I had the chance to buy the full five we were living in for $209k. Ah, the early 90’s, the good ole days.