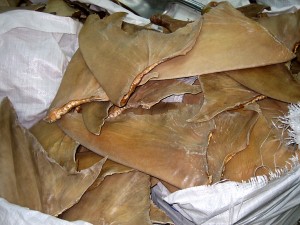 First off, I’d like to start by saying I haven’t seen FinGate anywhere before, so if any other news group uses the term I request that they use my name and a link back to this sight.

Now, onto the story. Last week Leland Yee proclaimed that the elimination of shark fin soup as an attack on ancient Chinese culture. The next day he held a conference serving shark fin soup to the media to show how wonderful and delicious it is.

Then apparently, Leland remembered how environmentally friendly the people of San Francisco Bay Area are. He sent out a rather waffly sounding email that says that while he condemns the finning of sharks, he opposes the ban on shark fins.

Is eight reasons enough or need I say more? Apparently while my site is focused on San Francisco and has the most readers here I received a letter from a Shelly Cole in North Carolina:

My name is Shelly Cole and I live in Greensboro, NC….Tonight while perusing the net I ran across your blog from 2/16, “Waiter!  There’s a Shark Fin in My Soup!” .  Great blog!  Very well written.  I decided to check out Mr. Yee a bit to see who his is.  I despise hypocrisy!  My number one pet peeve is to be lied to!  I just can’t stand it.  If you lie to me…we’re done….or you at least better be hoping that we have a relationship that goes back for MANY MANY years.  You certainly won’t be trusted again any time soon, but you might not get booted out the door.  ‘Course…if you lied to me….you just might not care if you get booted out or not…

Anyway, after going to Mr. Yee’s sight, I couldn’t believe my eyes!  The hypocrisy!  AAAAGGHHH!!  So I decided to send him a note.  I thought you might be interested in reading it.  Not that I claim to write as well as you, but I hope he actually sees it and that I conveyed the point home to him in such a way that he not only gets it, but that he NEVER FORGETS IT!!  I copied your blog into the email so he’d know what he was getting creamed for, in the event that he hadn’t read your blog.  I intentionally left out the part of who wrote the blog, the name of the blog, or the blogs url.  If he hadn’t read it and then didn’t like it, I was sure how you would feel about unwanted/unsolicited attention that it might garner you from him or from his camp.  I hope you don’t mind my small attempt at “protecting” you.  I doubt I’ll hear back from him, but if I do and he wants to know who the blogger was and you want me to tell him, I’ll be happy to do so.  If you don’t want me to tell him….he’ll never hear it from me…..  😉

I was really very angry with him after having read both  his statement and your blog.  So….I let him know about it….

Thank you Shelly, I think Leland knows about me by now. 🙂 Apparently this is bothering more people than those in the SF Bay Area and they’re speaking up about it [keep in mind my site is read by people in over 100 countries around the world.] I also learned that in the heavily Asian populated state of Hawaii that they have banned the preparation, selling and serving of shark fin soup. Apparently Hawaii doesn’t have as much problem with an ancient Chinese cultural tradition as other people do.

I’ve noticed that no one has really been talking about the taste until my friend Danielle sent me a comment:

I’ve had shark fin soup. It’s pretty gross. And the thought of where it comes from and how it’s obtained makes it even less appealing. From what I recall… the broth was fishy, but not overwhelmingly so. The fin parts have no taste on their own, and we had the shredded kind (they come in shredded and whole form), so the texture kinda reminded me of very short, very very thin (like rice vermicelli, maybe), yet overcooked, noodles.

Just so you all know, Danielle is not Chinese, but Filipino, a culture that has a very strong connection to eating fish [I won’t hold durian against her though. Hell, I wouldn’t hold a durian against anyone, but fruit doesn’t feel pain when you cut into it at least.] 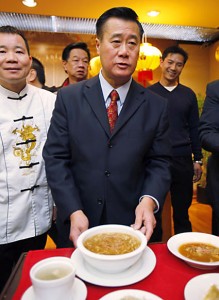 The UK based group Shark Trust had an interesting article with lots of information on the shark fin trade as well a letter from Chef Gordon Ramsay who, like him or not was appalled to find out about shark finning. This site also provides lots of information to use if you want to be so bold and approach a Chinese restaurant that serves shark fin soup.

None of this is an attack on the Chinese population, it is an attack on a practice not a people, that is reprehensible and is destroying our ocean’s food chain. China has had many cultural traditions that they have tossed aside as being barbaric. If I remember correctly, the British stopped beheading and draw and quartering criminals a few centuries ago, yet that was a cultural tradition. The Romans [Italians] as a cultural tradition fed slaves to lions to amuse the poor, but that as well is gone. So why not add shark fin soup to the list. The only reason that Chinese feel they are targeted is because they are the only one’s that eat it and total of the finning trade supplies China and Chinese markets around the world [if the country allows them to serve it of course.]

Leland Yee, please follow the links here and read the information. Perhaps you could find some way to progress and show your wealth and abundance, not by eating the fins of barbarically captured fish that is toxic to consume and instead show your wealth by giving back to the people. I believe that is a finer tradition to embrace.