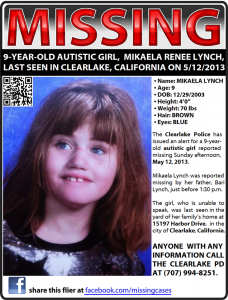 Sometimes you get your heartstrings pulled in not a good way. Last Friday my daughter’s class attended the Special Olympics at Kezar Stadium. As I’m sure most of you are aware, my daughter is autistic. While we were waiting for her turn to perform we were all sitting and waiting with the kids just getting more and more excited having to sit still and not getting to run around like kids want to do. Sitting next to me was a girl who is all over the news right now — Mikaela Renee Lynch.

She attends my daughter’s school and is autistic like my daughter. She always has an aid with her because she can’t function on her own and like many autistic children and will take the first chance she gets to run off and explore. Mikaela, like my daughter is a curious little girl. She doesn’t run off like most kids, she runs off because she might see something she wants to take a closer look at. Parents of autistic kids know this and understand that you have to keep an eye on your children at all times and even turning your head for a second means you can lose them momentarily.

Well, this is a worst case scenario in that Mikaela wasn’t lost momentarily, they’re still looking for her. The information coming in while up to the minute hasn’t had enough time to be processed yet so no one really knows what is happening. What I do know is this, Special Ed teachers and aids from her school have gone up to help find her because they know her and she knows them which might help. While Mikaela likes water, it looks like there is now video footage of her away from the creek which is good. Most kids don’t learn how to swim early enough in my book, and autistic kids have a harder time understanding the concept of swimming. Add to this that we’re talking about a creek with running water that can be up to 11 feet deep and not a bathtub in a secure location makes it even scarier. So I’m glad that they don’t think she went into the creek. 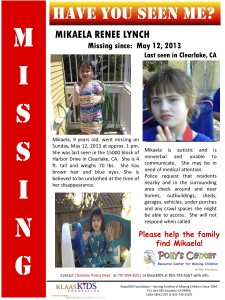 The down side to this is that it is now Wednesday and she went missing on Sunday. Even for a non-autistic child that’s a long time. Where is she is what we all want to know. Reports have said that Mikaela has the mental state of a one year old. While that’s a convenient starting point there’s more to her than that. She’s ridden horses. She knows she loves peanut butter and crackers. She can walk and run. She can run very fast too. While I’m no expert I have noticed that autistic children tend to be rather strong and seeing as Mikaela is built like my daughter only older and bigger she’s a lot of work to keep from running if she doesn’t want to go along with it. Aids have switched off watching her because she can tire a person out quickly. This isn’t a bad side so much as it is just the way some autistic children are wired. When you hear the word autistic, don’t think retarded. While there is some developmental delay in some autistic children it’s not the same thing as metal retardation. Speech is frequently a problem with autistic children and when they do start to speak they tend to have problems enunciating words so as a parent or someone who works with autistic children have to learn a new language to communicate with them. My daughter is six and doesn’t know how to swear, but she needed something to say when she was upset and so she mutters, bugga-digga. That’s her swear word she invented to express herself. We don’t really know what that means to her, but we understand the context.

Unfortunately context is something that is being left out in many of the reports. If you’ve never been around an autistic child you aren’t able to see these things. While Mikaela is non-verbal there are little ways she uses to express herself. She flaps her arms wildly when she’s excited like many autistic kids. She falls to the ground when she’s tired of being held to get away, not because she can’t stand. There are lots of people out there trying to find Mikaela and I hope that they find her soon. She’s a sweet little girl that needs help and I hope for the best for all of those who are out looking for her.

UPDATE: It is with a heavy heart that I have to report the following information received from the Clearlake Police Department:

Clearlake Police Chief Craig Clausen has confirmed that the body of nine year old Mikaela Lynch has been found in Cache Creek about forty five minutes ago.

The family did not offer a statement and has asked that everyone respect their privacy at this time.