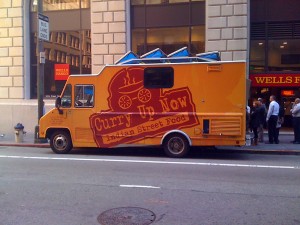 I stopped working downtown too soon. It wasn’t my choice, but I missed the first rush of the new sensation that’s sweeping San Francisco and everyone’s smartphone — food trucks. I’m not talking the old beat up taco trucks that you used to see in Oakland, but these are upscale trucks serving upscale food and the best way to find out about where they are in on you smartphone.

Here’s how it works. You pull out your mobile phone and download a Twitter app. Then you find and follow all the trucks around San Francisco. They really are more SF and the peninsula than just SF, but they seem to be focused around San Francisco at least a couple of days a week.

If you want to be an über-cool techie hipster geek you’ll get Eat Street which gives you a map that’s based on their GPS so you can see where they are when you want to get food. I use both because I like to talk back to the people to try and get them out to the Sunset and Richmond on sunny weekends [WHICH WE DO HAVE!!!!]

You can find more than just tacos and burritos now. We’ve got BBQ places that are cooking up some smoky goodness. Curry Up Now that  does burritos with an Indian twist [aweeesome!], Vietnamese Banh Mi sandwiches left and right. Pretty much if you can think of a food there’s someone out there in a truck that will sell it to you.

One of the best places to try and fill your food truck craving is Off The Grid that’s held in many places around San Francisco, but Fort Mason [5pm-10pm Fridays] seems to be what everyone is talking about because that hosts the most trucks [up to 30] and tents. I was down at Fort Mason one night and happened to see a huge amount of trucks out there with an even huger amount of people wandering around. The smell of all the different trucks wafting up through the open window just pulled me towards the trucks during a break. I think I ended up spending a little over $20 getting the small sampler plates as I call them from several of the trucks.

This was definitely some good food and I wish that we could get more of them to try coming out to Ocean Beach because on a sunny day there isn’t anything going on there to feed people. The biggest problem is that we usually know about a sunny day out here with about 15 minutes in advance. Most of the trucks have websites where you can check where they’re going to be that week if you don’t have a smartphone.

Food trucks are gaining more ground in San Francisco now that the city has made it easier for them to do business. Because they don’t have to pay rent it’s cheaper for them to operate which is bad for brick and mortar businesses, but good for you and me because they can produce the food cheaper. Check them out NOW!