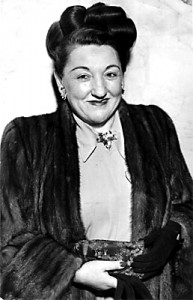 Since I’ve been talking about some of the old characters of San Francisco fame, my friend Nikolai reminded me of one I hadn’t written about, Sally Stanford, the Grand Madame of San Francisco. Sally’s claim to fame was that she was the Queen of the bordellos in San Francisco who attracted numerous clients rich and famous from around the country, if not the world. Sally was probably the best marketing tool to get men to come to San Francisco in the 20’s-40’s.

Her best known bordello was located at 1144 Pine Street near Jones where Herb Caen even claimed that the United Nations was formed there because the delegates convened there and most of the negotiations took place in the bordello’s living room. Edmund G. Brown [Jerry Brown pappy] raided the place which led him winning the 1950 election for Attorney General of California. Sally was best known for her infamy as someone who ran a bordello, sponsored little league teams and even ran for the Mayor’s seat of Sausalito…AND WON!

Even during a century when women got the vote, danced in jazz clubs, built war-time battleships, and cracked the glass ceiling in business and politics, Sally Stanford broke more rules than most. She married seven times—but never to a Stanford—used more than two dozen names, beat seventeen arrests, and sued a famous businessman for non-payment.

At age seven, she convinced local golfers to let her work as a caddy. During the period when Al Capone was machine-gunning fellow bootleggers, she fed salty roast chickens to her speakeasy customers to heighten their thirst. Investing Prohibition profits in Tenderloin hotels, she polished her rough edges and climbed uphill (Nob Hill) to become San Francisco’s most successful madam. She kicked out Humphrey Bogart for disorderly conduct, welcomed Errol Flynn, and entertained delegates to the 1945 United Nations organizing conference.

[mappress mapid=”32″]In the 1950s, she retired from the bordello with a multi-million dollar fortune, joined the Chamber of Commerce, supported Little League and Guide Dogs for the Blind. She rehabilitated “Valhalla,” [a restaurant still in operation today in Sausalito] transforming it from bay-front dive to plush restaurant. It became the place to see and be seen. Patrons included Harry Bridges, Marlon Brando, Bing Crosby and Lucille Ball [Lucy…in a whore house?]. Never resting on last year’s success, Sally entered politics as a pro-business candidate for Sausalito City Council. She lost five times before winning three. In her final campaign (1976), she was the top vote-getter. Sally died in February 1st, 1982 at Marin General Hospital of a heart attack at the young age of 78.

And thus, the madam became Mayor. “Sinners never give up!” declared Sally Stanford, after losing her first political campaign. Sally had hutzpah for sure.