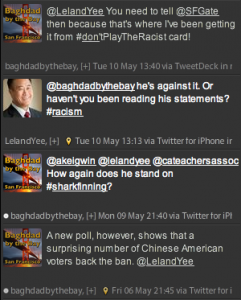 Oh no he dit’nt! Yes he did. Well at least someone on Leland Yee’s staff or Leland trying to look like someone else posted the following to me on Twitter today: @baghdadbythebay he’s against it. Or haven’t you been reading his statements? #racism

I assume it wasn’t Leland Yee posting directly because if he does he’s just become one of those people we all hate who talk about themselves in the third person. I am assuming someone will be getting their walking papers soon. Make sure you click on the picture and read how this all started.

I don’t quite understand how making a statement that a surprising number of Chinese American voters backed the ban on shark finning makes me a racist? Perhaps the fact that Senator Yee backed the ban on foie gras makes him a racist for destroying French Culture? I think the method of foie gras production is just as barbaric as shark finning so do I hate French people as well as Chinese people? No, I think not. We even have Yao Ming speaking out against shark finning in the US and in CHINA, yet I haven’t heard Senator Yee calling him a racist.

Leland Yee has spoke up that he believes it should be ok if you use the whole shark. That wouldn’t be a problem with me either except that people don’t eat shark anymore because of the high mercury content. Yee stated that Costco even sells shark meat so there would be plenty of fins to go around.

The problem is once again, Yee was wrong. Costco hasn’t sold shark meat in over ten years. If you drop Leland Yee into google you’ll find a large number of articles pop up linking him with the shark fin soup debate or pretty much him against everyone else. 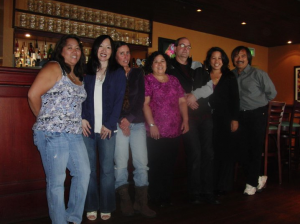 Now let’s look at the little #racism hash tag. Take a look at the picture on the right. That’s me the nazi racist standing with a few of my friends at a small high school reunion. See a common thread in the picture? Riiiight, there’s a whole lot of Asian going on in that pic. I went to George Washington High School that was over 60% Chinese at the time. If you didn’t like Asians, that wasn’t a good place to be.

I live in the Sunset District, in a part of which I’ve had Chinese neighbors for the last 15 years and is a predominantly Asian neighborhood. If you don’t like Asians this is not a place to live, but I’m still here.

What this is about is a barbaric act to harvest the fins of sharks then throw them back into the water to drown a painful slow death. Pelagic sharks must always swim. They have a constant need for water to pass over their gills so that they get oxygen. When they have no fins they suffocate while they are bleeding to death.

This isn’t like a lizard that regrows it’s tail when it loses it and this isn’t about racism. Keep that in mind Mr. Yee before you end up putting your foot in your mouth again.