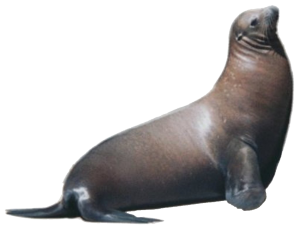 I have to give thanks to two of my friends Beth Wise and Lincoln Shaw who work at the Marine Mammal Center in Sausalito. I follow their posts to facebook about the work they do and when I heard about a sea lion they called Silent Knight I was happy. Not so much for the sea lion as it had been shot in the face with a shotgun and was now blind, but I was happy that they got to care for him and bring him back around.

Sea lions tend to not be bothered by people so they tend to act rather friendly towards us. Then some idiot has to pull out a shot gun and shoot at them to get them to move away from them. While that sounds like a good idea in some parts of San Francisco, it’s not a good idea when it comes to marine mammals.

I’ve had a love of seals, sea lions and all other marine mammals from a young age. I remember taking a class at the now defunct Junior Academy at the California Academy of Sciences and we had a field trip down to Año Nuevo Beach where the elephant seals come to breed. I remember jumping over a log with the rest of the people in the class only to turn around after and realize it wasn’t a log, but an elephant seal. These are pretty impressive and intelligent creatures and many of them moved from Seal Rock out near me to Pier 39 now where they put on a show for the onlookers and manage to stink up the place a bit due to their diet of oily fish which makes their poop smell a bit on the unbearable side.

Sea lions have always been the Marx Brothers of the pinniped world used in movies because of their humorous antics that mimicked human behavior if people had finds instead of hands and feet. They can adapt to living in these confined conditions, but they aren’t their happiest when they have to. This is part of the reason I’m glad that Silent Knight has been moved to the San Francisco Zoo. While he’s recovered from the shotgun blast, he’s still blind and can’t be released into the wild like the Marine Mammal Center normally does. The San Francisco Zoo stepped in and offered to care for him so he can live out his years with support and care from people who know how to take care of animals.

The Marine Mammal Center volunteers have a job that isn’t the best and they don’t get paid. Imagine going to work and having to blend up lots of oily smelly fish that you then have to more or less force feed to a sick not very willing animal. You probably don’t come home smelling very good and on top of it there’s no pay, no benefits other than knowing in your heart that you’ve helped an injured animal.

So cheers to Beth and Lincoln and all the other hard working people at the MMC. Maybe I need to get all the other members of my old band together and take up a collection to donation to one of their residents named Black Wolf [my band was named Black Wülf, note the umlat and U to make it look even more metal.]