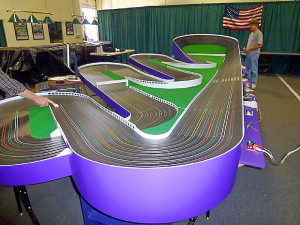 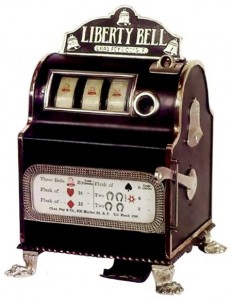 Since I’ve been using the wayback machine I’ll turn it on again and look at a man who was born in 1862 in Bavaria. A man 100 years my senior, one of 15 children who left Bavaria to seek his fortunes in the US starting in New Jersey and eventually ending up in San Francisco.

He liked to work with mechanical things and because of this he eventually wound up working at the California Electric Works where he met his friend Theodore Holtz whom after awhile decided to leave CEW and start their own company. The Fey Company specialized in telephone, telegraph and electrical equipment until in 1895 Charles Fey created a device he called the Liberty Bell, a boxy contraption that you would insert a nickel into and pull an arm on the side of the machine to cause three wheels to spin and depending on what three images came up you could win up to five dollars [if you got three liberty bells].

Charles Fey was the inventor of the first slot machine and it happened here in San Francisco. In 1980 E. Clampus Vitus placed a plaque commemorating the invention of the slot machine at the location of the original Fey Company at 406 Market Street.

The original Liberty Bell machine can now be found at the Liberty Bell Saloon and Restaurant in Reno, NV owned by the grandchildren of Charles Fey. It is made of cast iron and weighs in at over 100 pounds and believe it or not, it still works.

So here is a salute to Charles Fey the man who invented a way to take money from the willing without even having to be there. He was better than any disposed Nigerian Prince I’ve never met.