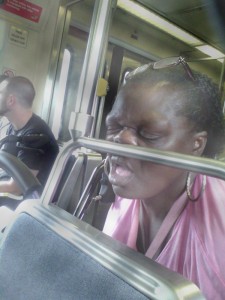 I had the pleasure [more like displeasure] today of riding MUNI downtown. It had been awhile since I’ve had to make this trip and it was a good reminder of some things you’ll encounter on a trip downtown thanks to SFMTA.

I always new it smelled on muni. You pack a lot of people in very close together like sardines and the body warmth and sweat provides a lubricant you use to slide through the people to get on and off the trains. Today was a bit different. Now I’m used to odd smells. I’m used to some rather repulsive smells and I’m not sure how I earned this talent, but I can identify some of the most disgusting biologically created aromas known to mankind and some not so known.

This could be from a friend that stayed with me many years ago who when I was throwing out some old ground beef asked me for it. He said he’d mix it up with some stuff and feed it to the dog. By mixing it up with some stuff that meant boiling it in water and then letting it sit on the stove for a few days. Now to be honest at this point in my life I was living on my own for the first time and had lots of extra cash so aside from breakfast in the morning what was usually a bowl of cereal and an English muffin I ate out quite a bit and only noticed this odd pot on the stove one weekend.

Upon seeing this pot and pulling the top off I was allowed to experience a smell so bad that it made me gag and run to open up the windows while trying to find a place to get rid of the rotting meat. When my friend came back to the house I asked him in a rather not to polite way why he left a ball of rotting meat on the stove. His answer, It’s for the dog and dogs eat carrion. OK, somewhere this vegetarian mixed up carnivore with carrion, but I set him straight that this was not acceptable in the house and that dogs ate fresh meat, not rotting meat that was being helped along.

Well, that was the aroma that filled the train today. It was horrible and you can add to that the fact that there’s only a few tiny windows way up top that you can open that won’t really ventilate much more than the recirculated air on the trains. What was worse is that it was a warm day on muni which meant that they didn’t have air conditioning on the train, but the heat which just made the smell of rotting flesh even more pleasant when you warmed it up a bit.

Luckily I didn’t have to put up with it for too long and there was only a few people who seemed to even notice it. It was either that or rotting flesh and muni go together so well that no one was bothering to notice. The biggest problem is that the drivers are sectioned off in their front compartments with a large window on the side they can open that brings air in and pushes it out into the train so they don’t have to notice the smell of rotting flesh until it’s time for them to leave the train or get on and you’ll notice how quickly they move then.

To me it seems wrong that SFMTA doesn’t care enough to get the insides of the buses and trains cleaned so they don’t reek of a rotting human intestines [yes, there was a bit of that smell too that I remember from working as an EMT many years ago. People who need to use the muni trains and buses shouldn’t be forced to start their journey having to hold their nose or wondering how bad it’s going to smell today. Granted, I understand that public transportation is there for the public at large and not just for a privileged few. If that were true, the privileged few would take cabs or drive to work, but when you live in SF you have to find less expensive ways to get things done and it is of my opinion that having to deal with muni funk on a daily basis shouldn’t be one of them.