We took a trip to the local Parkside public library that’s been recently remodeled and ran into a friend of mine for many years. I was originally going to write about the new library, but instead decided to write about my friend’s band, Pollo Del Mar.

The band is one of the more popular “third wave” of surf bands who also might delve into surf versions of Frank Zappa, Led Zeppelin, the Dead Kennedy’s or even Edvard Grieg [look up “Hall of the Mountain King” if you don’t recognize the name.] 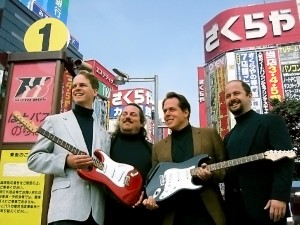 The band has traveled all over the world to Europe and Japan as well as around the US, but San Francisco is their home.  They’ve had songs on 26 different surf compilation CD’s in addition to their own in their 16+ years as a band. Just to give you a little feel about where this is band is coming from here’s a little paragraph from their website: 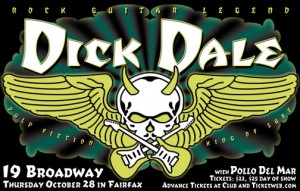 Anyone who cites Hugh Hefner and David Niven as guitar influences is definitely marching to a different drummer. I was lucky to catch these guys live a few times and while they sound surf there’s still just something a little bit odd about hearing a surf cover of a Zeppelin tune. Things like this set them apart from others which in a music town like San Francisco is essential. If you’re the type of person who likes kitsch and good music you should definitely check them out. Here’s a little sample of them called Cutlass Supreme.

Oh and if you didn’t know it, Pollo Del Mar is Spanish for “Chicken of the Sea” a reference to a certain tuna product which of course ties in with the surf theme of their music. Check them out. They’ve usually got a few shows a month when they aren’t out touring the world.