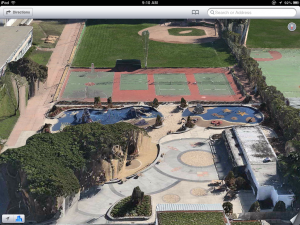 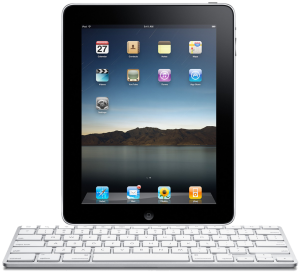 With all the speculation that’s out about the iPad 3 and the fact that iPad 2 sales have rocketed iOS devices and Mac computers beyond the number of Window’s based computer I started to think about whether or not the desktop PC as we know it may be disappearing in the near future. We have cloud computing which means that you don’t have to worry about storage space so for the average person who works in an office and only needs to do office like work such as typing memo’s, sending emails and perhaps a bit of database or invoicing, there are apps for that.

This first popped into my head when I was watching the TV show Revenge which is pretty much about rich people in the Hampton’s getting into cat fights, so you can see why I would like it. There is one person on the show called Nolan Ross who is a smug new money rich kid who as a desktop computer has an iPad with a bluetooth keyboard. When he’s out he just takes the iPad with him and leaved the computer at home. I saw this and started to think that maybe he’s onto something.

I looked through apps today to see if I could find an app to do all of what the average sales person I used to work with used. There’s an app for it. There are even invoicing apps and apps to run credit cards [Square anyone? Hell, I’ve got it on my iPhone.] as well as plenty of database apps and Salesforce apps for keeping track of your customers. Need to write a letter that you need to print out and send to a customer, there’s an app for that. Email and web browsing are always built in. There’s usually a built in calendar and contacts app so you’re covered. I’ve done my share of training elderly people on how to use a tablet computer [99.9% iPad] who have no need for a desktop computer and they are able to do everything they need with one.

Now people like me who do web and graphic design work it is currently a bit tougher since while you can hand code or using a CMS system for your website is easy, hands on graphic design software isn’t there yet, but I’m sure it will be soon. Programmers will still need at least a laptop [which most of my programmer friends have]. Game programmers will probably be the only ones for awhile that need the big mega towers with all the hyper-mega-uber graphics cards to pump up the graphics to times 1,000,000. I’m sure there are a few others who will need real desktop computers for the next couple of years, but they’re definitely needed less and less. 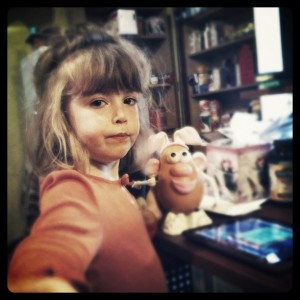 As I’m sure you remember we were able to get an iPad for our daughter during a time when we didn’t have much money [which is a fate we still share today]. She loves the iPad a lot and I thank again all of my readers who help us get it for her. Then my wife came running into my workspace all white face with a look of horror and my daughter running behind quickly screaming and crying — I think we just lost the iPad.

WHAT!? She handed it to me and it looked fine until she peeled back the case and showed me the dent. The dent happened to come right where the volume up and down keys were and while it still worked we couldn’t get any volume out of it. I quickly got an appointment at the Genius Bar to have them take a look and then started doing some research.

I was seeing everything from a few people who got it replaced free to most people who had to pay $299 or buy a new one. My heart sunk. This is my daughter’s baby. She treats it like a puppy hugging it and petting it. She never throws it or drops it unlike many of her other toys. She knows this is something special for her.

For any parent of a child whether they have autism or not I would highly suggest an iPad. My daughter has improved so much since we got it for her. She couldn’t point at things before, but now points to things that she doesn’t know the name of. She’s learned how to say words she never said a year ago and now she can even write. Sure she has therapists that help her out, but a lot of this even the therapists say comes from the iPad. It has helped her immensely and I was pretty devastated to learn that this great tool we had for her might be gone and we don’t have the money or credit to afford to get it fixed or buy a new one.

I went into the Apple store thinking to myself well, maybe I could ask for donations again, but I don’t really like begging. If you like the blog and want to make a donation feel free to do so, but I refuse to sit out there on the internet with a cup in hand asking spare change from everyone who comes to my blog. I’ve been getting enough work from TaskRabbit to help us get by until I can get a real job again so I figured I could find a way to make it work out.

So my Genius is guy named Tony. I told him the story and how this is our autistic daughter’s best friend [yes, I played the autism card, but it was important because of what she’s got from it.] Tony took a look and said, well, it’s only a little dent and no screen damage so we’ll replace it for you right now.

So the crisis has been averted and we’re in the process right now of getting the back up reinstalled on the iPad. Tony suggested that we get an Otterbox case for it which my wife and I have been talking about for a while. Now it’s obviously a definite buy item. I think I’ll have to take on a few more tasks to get the money to cover this one, but it’ll be worth it in the long run if it’s something that is helping our daughter improve herself.

Tony, thanks for helping a brother out. 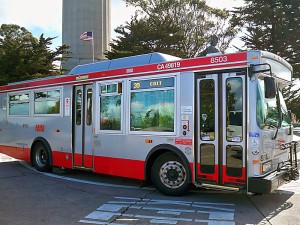