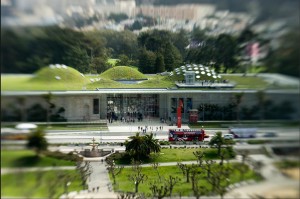 As most of you know I have had a love/hate relationship with the California Academy of Sciences. I love the fact that they have a super eco-friendly building with LEED Platinum certification, but what I have found with the new change is that they don’t have the science so much anymore. I grew up at the Academy and whenever I had a science project at school I would always do my research at the Academy because it was a treasure trove of information and because I was also a member of the Junior Academy I had access to even more.

I received my renewal notice from the Academy a few days ago and noticed that last year we paid $159 for a family membership. This year they have risen the price to $199. While that’s less than a dollar a day that kind of thinking only applies to food, not an Academy of Sciences membership which has now entered into the luxury realm. They’ve raised their prices to $29.95 to gain entrance to its hallowed halls, but once you get inside it feels empty. See the fish! See the rainforest! See the planetarium! (sorry all our shows are filled for the day) See our living roof! Oh, here’s some crap we’re using to fill in the space while you walk to our cafe to plunk down another $50 on top of the $100 you just put down to get your family of four in the door on top of the parking fee.

I’m not taking it anymore. While I grew up there and learned a lot through my activities there the Academy has been rebuilt to serve science to the rich, not the masses. This prompted me to send them the following letter:

It is with great regret that I will not be renewing my family membership this year. You price for membership has risen too much over the years to make it feasible for my middle class family to afford anymore.

I grew up as a part of the Academy of Sciences, attending classes at the former Junior Academy while volunteering at Steinhart Aquarium and eventually moving on to work in the Junior Academy and Planetarium. The Academy gave me great benefits at the time that gave me much more than I was learning in school and had me understanding organic chemistry at the age of 12 to the point that I was regularly pointing out errors to my teachers.

That was many years ago. Back when a $25 membership would allow your entire family and two guests walk freely about the Academy that wasn’t so incredibly packed as it is today. We also used to have free monthly meetings and a magazine delivered to us each month and I always looked forward to the free members night that gave us all behind the scenes tours of the aquarium and all the other departments at the Academy.

While the prices obviously have to rise over time, your costs less than 10 years ago prior to the rebuilding of the Academy were $65 for a family membership and came with eight guest passes and you still had the members night. Today that would cost me $1000 and on my budget that makes it unavailable. I have had the standard family membership which when I paid it last year was $159. If I were to renew it today it would cost me $199 which I still cannot afford.

There was a time when the California Academy of Sciences served the people of San Francisco. Now it would cost a family of four $100 to spend a day at the Academy and to me that is unacceptable. I regret that what the Academy once offered me it no longer offers the people of San Francisco and that my daughter will grow up without having access to what I had. I regret that there are so many people flocking to the Academy and giving up their hard earned money to view the aquarium, rainforest and planetarium with a few bits and pieces strewn about. There is no more Wattis Hall of Man, no more Hall of Birds, no more Hall of Minerals, no more North American Hall, no more Life through Science, no more Swamp and no more Entomology room. You have retained African Hall, but the only thing people seem to pay attention to is the penguin exhibit with the rest of the hall being the only quiet, open space in the Academy.

I used to be able to spend an entire day at the Academy of Sciences, but now I can take it in in under two hours. While the Academy has grown in square footage it has shrunk in what it is offering its patrons. I have friends and family who come to visit here and they would love to see the Academy of Sciences, but as soon as I tell them the price they choose to go somewhere else. I used to be able to give them my cards to use, but now you insist on members to show their ID to get in. True, you do offer the one free day a month which is by far the worse day to visit the Academy as it is so crowded it is probably coming close to passing fire code violations on occupancy.

I am not sure if I will ever return to the California Academy of Sciences again unless there is a change back to serving the people of San Francisco by not selling the sizzle instead of the steak at a high price, but by serving up science to the masses that teaches them and gives them a better understanding of the world we live in and how fragile it can be.

The times, they are a changing. Please share this with your friends. I think it will be a long time before you hear me mention the California Academy of Sciences again.

UPDATE: After doing a little fact finding I’ve just discovered that the family membership was $60/year until 2008, A mere 3 years ago and offered the benefits of 4 free academy passes that they valued at $7 each not the $29.95 they ask today, three years later.