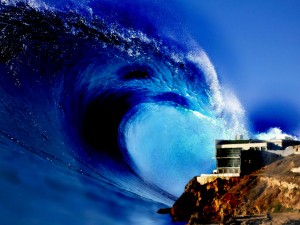 You’ll all have to thank my wife for this post. She had done a bit of research on how bad SF would fare if hit with a tsunami and I have to say that my off the cuff, unscientific assessment was off. I had it worse that it really would be.

She steered me toward the County Tsunami Inundation Maps website that shows just how bad we would be hit and I was kind of surprised. It’s the first time I am glad I’m on the front line of defense because the wave would hit us then make a left and head into the bay. Pretty much if you live in the Sunset or Richmond above 47th avenue you’ll be safe. The site’s a little hard to understand at first because it gives you a far away map and you have to click on it to download a large PDF image. I should have figured that since it was run by the government it wasn’t going to be easy. Maybe Apple should be hired as a consultant to make it more user friendly.

From what I can tell from the maps the worst places to be the Marina, the Wharfs, China Basin and Islais Creek. Oh let’s not leave out Treasure Island which would be underwater. I guess my earlier jokes about the tsunami evacuation signs being at the beach wasn’t that far off. Essentially they’re tell you to move a block away and you’ll be fine. I’ve also noticed that Oakland, Alameda and Emeryville will have a few problems as well even though they’re farther inland. Even those places won’t be hit by more than a few blocks.

It appears that as long as you are about a half mile in from the water you will be fine and have nothing to worry about. So everyone, stop being paranoid and get back to enjoying life. SF 1 – Tsunami 0. 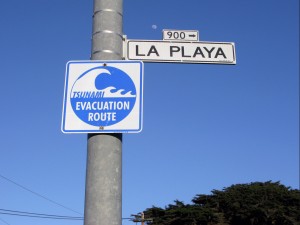 Oddly enough it was earlier last week I was thinking about writing this long before the earthquake hit Japan. It’s one of those funny, duh kinds of things that just has me scratching my head sometimes. Notice the sign to the left. Good idea to know which direction to go in case of a Tsunami emergency.

I’d like to talk a little bit about tsunamis and San Francisco. We used to get tidal wave alerts fairly often out in the Sunset with warning to expect flooding. You know what we used to do? Drive down to the beach to watch and see if the big wave ever came. Absolute opposite to what a person should do, but we did it anyway. Guess what. No tsunami’s ever came. Even if we did get a big one there’s a few hurdles it would have to cross first.

So all in all we’re pretty safe. My house is over 100 ft above sea level so I know I’m safe and if there’s ever a chance I’m not then there’s pretty much no where in San Francisco you’d be safe. 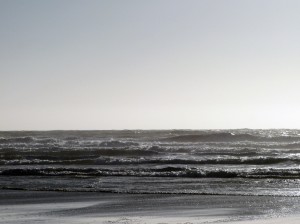 Yes, this sign was money well spent for people who ride on a short bus to their meetings at the low IQ club. No where else further up Judah is there another sign except over on Lincoln Blvd where there’s one a block up from the beach. No other street has signs like this so I suppose the city of San Francisco is telling residents that if you live in the northern part of the Sunset District you probably aren’t very smart.