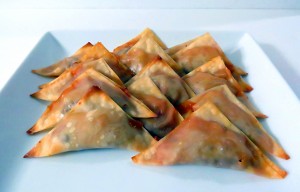 Way back when I was in the fifth grade i had a teacher named Ruth Omatsu. She was always one of my favorite teachers at Lawton Elementary school because she got us excited about learning. While we learned a lot about science and reading and math in her class it was the special side things she taught us that really stuck with me like wonton cookies.

Bringing a deep fryer around 10 year olds isn’t something you’d get away with doing today, but she decided to teach us to cook one week and she had come up with the novel idea of wonton cookies. They were really simple and delicious. You’d take a wonton skin and drop some coconut, brown sugar and chocolate chip on one half. Then you’d wet your finger and run it around the edge and fold it over into a triangle and deep fry it.

My Mom loved the idea and invited Ruth over one day to show her how to do it. My Mother took it a step further and chopped up banana and pineapple to add into the mix. Really anything sweet would probably work in one of these. If you’re adding in a harder fruit like apples you’ll definitely need some brown sugar to help loosen them up.

While I haven’t seen any Chinese restaurant offering them I think it would be a great idea for them to start. It’s a novelty that I haven’t seen anywhere else and could be a new San Francisco tradition. The only thing that comes close is a Philipino dish called Turon. I’ve seen it in stores, but I’ve yet to try it. From what I understand it’s banana, chocolate and star fruit made to look like a lumpia, but is sweet inside. Even though I dated a girl who was Philipino for six years I had never heard of this before, but it sounds like something I’m going to have to try. In the mean time I’ll stick with the wonton cookie version because it brings back memories of school. I’m sure some of my Asian persuasion friends will chime in on this one. Steve? You out there?

Hat’s off to you Ms. Omatsu!