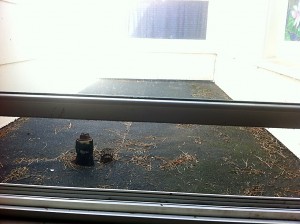 I’ve been around a lot of houses in San Francisco and it seems like the Sunset District is the only place where we get a problem with pine needles. It could be because they blow south from Golden Gate Park or it could be the people who got the idea of  stuffing that old Christmas tree in their backyard 50-60 years ago and now it’s taken root and taller than the house.

Now don’t get me wrong, I don’t have a problem with trees. I used to spend my days in the summer at my Aunt’s house in the foothills of the Sierra Nevada mountain range so seeing big tall pine trees wasn’t unusual. Where it begins to be a problem is when you live in a house with people who though planting pine trees in their backyard was a good idea.

Here is my main complaint. If you take a look at the picture you’ll see something you commonly find in Sunset District houses. It’s a skylight so that when you wash your dishes you can look out the window at a kind of sunny box. Unfortunately, they also tend to collect pine needles that get blown by the strong salt air which of course, land in your skylight. My wife, who is a goddess in my opinion asked me for help yesterday as she climbed out to clean out the pine needles that had started to become rather thick. She is a goddess because her being 5’4″ and me being 6′ she understands that it’s easier for her to get out the tiny window than me. This is unlike my parents who always decided that me being the biggest one in the family was best to squeeze through tight openings.

The little bunch of clumped up wire that you see next to the pipe is a homemade filter that my grandfather made specifically to keep pine needles out of the drain. It works fine when you don’t have a lot of needles, but there have been times when the needles have blocked the drain and we’ve had rainy weather in which we suddenly have six inches of water starting to build up which even with the tar paper the water will eventually leak around and you’ll get rot underneath it.

I think overall my biggest problem is to figure out what to do with this area. My family used to have cacti right outside the window because they didn’t need water and it was hard to get to. It’s really just a useless part of the house that lets a little light into the kitchen, but requires high maintenance. If anyone has an idea or two I’d love to hear them. 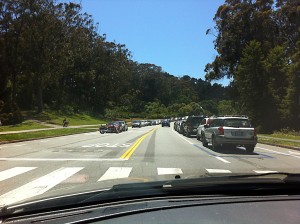