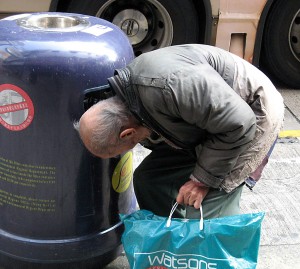 GARBAGE! The tainted word on the street. My mother always told me that if I didn’t get good grades I would end up as a garbage collector. As it turns out the garbage collectors make a better wage than I was making with my college degree for some years. Now I have to admit that with technology’s evolution garbage collection has gotten much better and our streets are cleaner, so I’m not going to totally blame Recology who collects our garbage problem, but they are a part of it.

In my unemployed times I spent my mornings at home getting up early and pretty much doing nothing in the mornings except look for work on craigslist. Come garbage collection day I would hear the trucks come by and the guy would haul the bins to the truck that would pick them up and dump their contents into the garbage or recycle areas where they would be crushed down a bit.

These were still open areas and just as we all know when you stomp down your garbage to fit more in it expands back a bit afterwards. The problem with this is as the trucks pick up speed some of the garbage blows out the side of the bins back onto the street. San Francisco being the windy city that it is causes the garbage to be blown back across our lawns, houses, sometimes into our entryways.  Just yesterday I pulled a receipt out of my entryway that turns out came from cafe out in the Mission. After that I picked up the lid and straw from a McDonald’s cup that the closest one was a couple miles away.

This isn’t discards from people driving by, but they come from one of two places: Recology trucks that let some of their garbage fly off or from recycle raccoons. The second are the people that at night when you put out your bins go through them to find anything of value to take and sell back at the local recycle areas in the neighborhood. Maybe that lid from McDonald’s came out of our bin from our last trip there, but we didn’t throw it on our lawn, the recycle raccoons who go through our bins, some of which I’ve seen stop and wait for you to bring your bins out and even say thank you before raiding your bins have forgotten to put back.

These people are essentially stealing money from the city by foraging in your waste bins for aluminum and glass. They’ll pull out the bags of recycling you’ve deposited and go through them to find what they need and the nice ones put back what they don’t. Some on the other hand leave the bags outside to move on quickly, or just give it a toss back without bothering to pick up what falls out.

These tend to be elderly citizens looking to make an extra buck and I don’t necessarily blame them for looking to make an extra buck, but they need to either understand that their presence is making our neighborhoods look ugly or Recology needs to find a way to keep them from raiding the bins. PG&E has a system that if you have a gate on the front of your house that the meter readers have a key to get in to read the meters, so perhaps Recology could create locked bins that the collectors would have to unlock before dumping in the trucks. It would also be nice if the bins were made of a more sturdy trapezoidal shape that would keep them from blowing over in the wind dumping their contents on the street rather than the inverse trapezoid shape  that makes them top heavy and bottom light that doesn’t work with our winds.

I love my neighborhood, but it really burns my ass [thank you Terry Baum for that phrase] some days when I see my neighbors hard work and money invested in making their front yard look nice only to see it littered with paper and twine wrapped around their eco-friendly, low water consumption, San Francisco values plants.