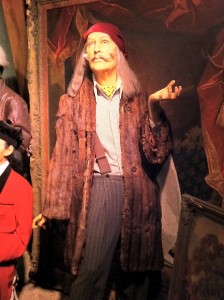 Normally, I like to be really proud of the things in San Francisco. This is one of the times I’m not sure what to say. I love wax museums, but after visiting Madame Tussaud’s in London and Las Vegas all others pale by comparison. That being said, this is still a kind of fun place to go. I love the wharf for it’s kitschiness. There’s lots of schlock for sale and every other shop on Jefferson Street sells either candy, t-shirts, cameras or antiques. I don’t understand the antiques part, but in between these little oddities there’s a bit of fun.

Today, thanks to SFKids.org, we got a free pass for the family to the Wax Museum at Fisherman’s Wharf. What totally surprised me was that while it had been awhile since I’d been there it seemed much smaller than it used to be. Thomas Lee Fong purchased the property in 1962 and opened the wax museum in 1963. It wasn’t much, just the wax figures against black backgrounds. The place kept growing over the years and there was a big ruckus in the 80’s when they made a likeness of Michael Jackson who came out for the unveiling event. I remember Michael was jumping around on top of the cars parked next to the museum and it was all caught on tape for the home audiences to gawk in shock at.

In 2000 they did a complete remodel and now the entire ground floor is the wax museum. It used to occupy all four floors, but now it’s only one floor and that somehow makes it bigger. They have done some decent work in setting up the dioramas with the wax figures, but other than that the likenesses aren’t exactly top shelf. Our daughter enjoyed the whole show of walking around and looking at people who aren’t moving. I’m sure if they had a wax Elmo she would have exploded, but they didn’t. I do remember the Chamber of Horrors being a lot more gruesome than it is today. During the remodel they moved all the Chamber of Horrors stuff down the street to have a cavalcade of the grotesque for the tourists. We’re talking a rack that you could twist the wheels and listen to the wax “victim” scream in agony or the Iron Maiden complete with a body dripping blood as well a quite a few impalings. You don’t have to worry about that anymore. Just remember that we walked slowly and took lots of pictures [encouraged by the owners], but I think we did the entire museum in under 15 minutes.

The SFKids.org website was a great resource for us here as if we had to pay it would have cost us over $50 total for the museum, parking and lunch. In the end we got away with only having to spend about $20. Check out the gallery below, but be warned it’s very dark inside so the photos are a little blurry and grainy.