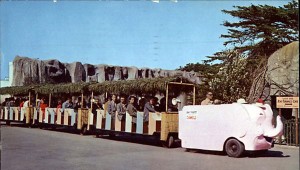 You have to have lived in San Francisco for awhile to remember the elephant train that ran at the San Francisco Zoo. Later becoming the zebra train for some odd reason, I still miss the original zebra train tours around the zoo.

I think they cost about 75¢ at the time which tells you about how old I am. You would hop on by the Children’s Zoo and ride around the entire zoo getting a little lesson on all the animals that you’d see. It was a good way to start your trip to the zoo, then you could walk around and take your time. For elderly people who had trouble walking around the zoo it made it much more accessible. While to many the zoo seems large today, it was even larger back then when they were using more of their space.

I have heard, but can’t confirm that it original ran from Playland at the beach to the zoo back in the day when it didn’t cost anything to get in. It was also said to have been used at one time to help students get around at SF State University, which if people thought of the place as a zoo that would give them proof.

I do remember going on field trips to the zoo and that was always the best way to move the kids around the zoo quickly and then get them back to the school. Field trips like that made going to school fun back then. It’s hard to find pictures of the trains now and I couldn’t even find one of the zebra train that replaced it. It’s even harder to find any information about them, but I believe the zoo stopped them in the early 80’s. I can’t even find out when they started using them there. There’s actually more information out there about the Little Puffer train, but doesn’t mention that it runs on a shorter track today than it used to. There’s a lot of stuff out there about the old zoo like Storyland which every kid had to see back then. Sure it was a little beat up and run down when I was a kid, but it was still fun to see all your nursery rhymes and storybook characters in 3D.

I’m a bit out of shape and when we got back from taking our daughter to the zoo today I was out of breath and sweating. I think that’s part of the reason I really miss the elephant train.